Very sad news coming from the Star Wars world. Peter Mayhew, the man who became the heart and soul of Chewbacca, passed away on the evening of April 30th.  He was 74 years old.

Here is what his official Facebook “Peter Mayhew – The Wookiee Roars” had to say.

The family of Peter Mayhew, with deep love and sadness, regrets to share the news that Peter has passed away. He left us the evening of April 30, 2019 with his family by his side in his North Texas home.

Peter was the man behind the mask of Chewbacca in the original Star Wars trilogy, episode 3 of the prequels, and the New Trilogy. He fought his way back from being wheelchair-bound to stand tall and portray Chewbacca once more in Star Wars: The Force Awakens. He also consulted on The Last Jedi in an attempt to teach his successor. [Peter] put his heart and soul into the role of Chewbacca and it showed in every frame of the films from his knock kneed running, firing his bowcaster from the hip, his bright blue eyes, down to each subtle movement of his head and mouth. But, to him, the Star Wars family meant so much more to him than a role in a film.”

Not Just a Furry Face

Peter Mayhew wasn’t just an actor in a mask. As his family notes, Peter would embrace all of those around him as friend:

The relationships that began then grew into the friends and family that he would love for decades to come. As the films released and became more well-known he had his eyes opened to the possibilities of what he could achieve with his role in the Star Wars universe. For more than 30 years Peter traveled all over the world spending time with his fans and friends. Peter developed lifelong friendships with the other cast members and his fans while on the convention circuit touching the lives of millions. As he realized over the years the impact he could have, he became heavily involved with the 501st legion, Wounded Warriors, Make-a-Wish, and other non-profit organizations. “

The Official Statement would go on to describe Peter’s philanthropic ways:

To this end, he established the Peter Mayhew Foundation, supporting everything from individuals and families in crisis situations to food and supplies for children of Venezuela during their recent road to freedom. He not only provided funds but became personally involved with each individual, family and cause he supported.

As he grew older he continued to “soldier on” as he put it and was completely in his element around his fans and supporters. He grew great strength from the energy of his family, friends and the fans he knew and loved.
He is survived by his wife Angie and three children. His kindness, generosity and care will live on in the Peter Mayhew Foundation with Angie taking the helm as his voice.
There will be a memorial service for friends and family held on June 29th and in early December in Los Angeles there will be a memorial for fans set up with his family in attendance, personal effects, and collection at EmpireConLA.

For additional information, information on the memorials or to offer condolences email ryan@ReelAppearances.com
Rather than gifts and flowers the family asks that you consider donating to the foundation so that they can continue his efforts to help the community. You can donate at http://petermayhewfoundation.org/make-a-donation.php”

He was at a con. Next to him in a booth – scantily clad, busty WWE beauties. Their line? No one. Peter’s line? Out the door.

Power of the wookiee”

I myself was lucky enough to talk to you and your wife at Celebration. Thank you again for coming showing your devotion to you fans. Rest in peace Peter Mayhew.

What were some of your memories of Peter Mayhew? Do you have pictures with him you would like to share? Well That Hashtag Show wants to hear from you. You can do that by hitting us up on Twitter @thathashtagshow and myself @starwarsnerd574. You can also comment from this article as well. Also make sure to stay up to date on all the Star Wars news by following us at ThatHashtagShow.com 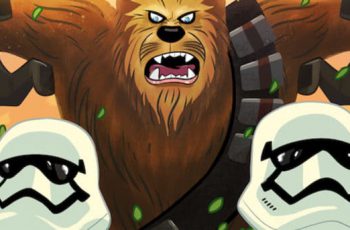 If you are a fan of STAR WARS comics like … 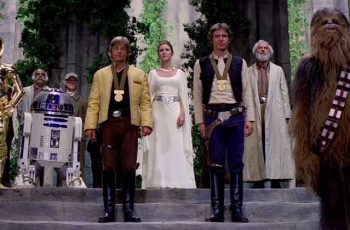