With Marvel releasing the one-shot Age of Rebellion comic series we are getting to see a lot of adventures from some of our favorite Star Wars characters. So far we have seen great stories for Princess Leia, Han Solo and even Grand Moff Tarkin and this week’s release didn’t let us down. Greg Pak gives us the story of Boba Fett and what kind of bounty hunter he was.

If you are a fan of Boba Fett and westerns then you will love this comic. The issue is titled “Hunter’s Heart” and just by the title you can tell what Boba Fett stands for. He is after one thing and that bounties. He does not care what the bounty has done, he cares about what he is getting paid.

Greg Pak does a great job giving us the story of Boba Fett. When Fett is introduced he is riding a mechanical horse through a desert on the planet Carajam. You can tell the impact Boba Fett has on people as they want to hide as he rides by. This is where Pak does a amazing job telling you what kind of person Boba Fett is.

I like how you get that feeling that Fett does not side with anyone. The story also shows Fett is all about the work and does not get sidetracked. By the time you are done reading, it is very clear that Boba Fett only has one mission and that is his bounty.

Marc Laming and Neeraj Menon do a great job of giving us that old wild west feel but does not take away from it being a STAR WARS story. The detail on Boba Fett is outstanding his Mandalorian armor looks weathered, beaten, and battle proven It also shows that he is known around the Outer Rim by it. The colors in the story give you a rustic and dirty feel of Star Wars. They also do a great job with the background charters. If you look hard enough you might recognize a few of them.

I mean come on its Boba Fett right what could be wrong with this comic? Well the story did a great job showing how powerful and determined Boba Fett is, but it really didn’t give us a lot about him. If you were looking for him to give some great one-liners you will be disappointed because he really didn’t say much in the comic. The other thing I was hoping for was that we would see him cross paths with other characters or maybe even learning if he survived the Sarlacc Pitt. I guess that will be another story for another time.

What would I rate it?

Overall this was a great comic for any Boba Fett fan. I mean Fett did what you expected him to do and that was kick some ass. On my Hashtag scale from one to ten I give Age of Rebellion: Boba Fett #1 an 8 out of 10 Hashtags. This comic is a must read for all STAR WARS fans.

Have you been reading the Age of Rebellion comic series? What has been your favorite story so far? Well That Hashtag Show wants to hear from you. You can do that by hitting us up on Twitter @thathashtagshow and myself @starwarsnerd574. You can also comment from this article as well. Also make sure to stay up to date on all the Star Wars news by following us at ThatHashtagShow.com. 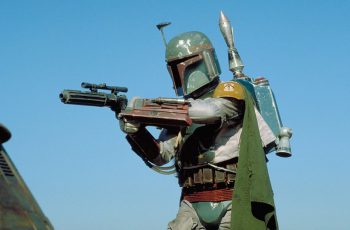 Boba Fett will return to the Star Wars universe in …