Maleficent has her wings back according to the end of her first movie.  Not only is she a skilled flyer, but she is avoiding the radar like crazy!  Maleficent 2 must be one of the largest silent releases I have ever seen.  Since the announced release date back in March and subsequent poster, very little if anything has been said about the movie, which releases THIS October; However, its first trailer dropped yesterday, giving us some insight unto the new movie.  Here it is:

Fans largely enjoyed the first Maleficent release, but with one rather large complaint.  When asked to name the evilest of Disney villains, Maleficent always ranks near the top of the list.  In her movie writers portrayed her as a sympathetic, good creature, who suffered betrayal and tragedy.  She hated humans for this reason, yet she could not stop herself from falling in love with little Aurora, saving her in the end.  How was any of this evil?

We received the first poster for Maleficent 2 a few months back and found out the title would be Maleficent: Mistress of Evil.  This boded well for a darker story embracing her evil side.  The trailer now seems to confirm it.  While Maleficent still possesses her wings, Angelina Jolie’s character has returned to her black garb she wore while evil and wingless. Even the opening tone of the trailer sets an ominous mood despite the pretty imagery.

From what I can tell this isn’t a movie about good vs evil.  It is a story about In-laws, which could arguably be worse.  Aurora and Phillip appear to still be in love.  It is when Maleficent meets Phillip’s parent that sparks begin to fly.  If there is one thing that intrigues me more than anything else, it is the clash of powerful personas we will see when Angelina Jolie squares off against Michelle Pfeiffer.  They are two women that command attention on the big screen and should play off each other magnificently.

This trailer seems to point to Maleficent returning to her evil roots, as she dresses once more in her black outfits and has a flaunts her powerful green magic.  One can’t help but wonder though, with a character like Michelle Pfeiffer playing opposite, is Michelle going to be the evil one?  Or will it be mutual?

After about three months of filming at Pinewood Studios in … 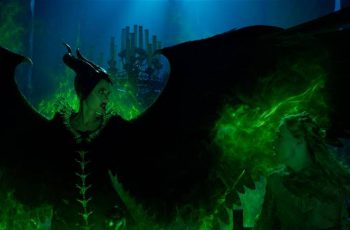