[Warning: contains spoilers for Star Wars: The Rise of Skywalker.] Thanks to the folks at Vanity Fair this morning, we now have a wealth of new Star Wars: Episode IX information to sift through and dissect. Among the revelations in the article is firm confirmation that the Knights of Ren will indeed appear in The Rise of Skywalker. Likewise, we get the first official look at Keri Russell’s character, as well critical details.  There’s a lot to sift through, so let’s get started with some of the article’s highlights.

Knights of Ren Confirmed for The Rise of Skywalker

One of the biggest points of speculation with respect to Star Wars: Episode IX has been whether or not we will finally see the Knights of Ren. Speculate no longer: The Knights of Ren are definitively in The Rise of Skywalker as seen in this image:

There are few interesting things to note about the Knights in this photo. First, they are wielding traditional, bladed weapons, not lightsabers. Early guess had suggested that they might be fellow Jedi-in-training that left Luke Skywalker’s new Jedi Order with Kylo Ren. That no longer appears to be the case. Instead, the article describes them as the “elite enforcers of Kylo Ren’s dark will.” One thing the sequel trilogy has been lacking is a truly fearsome villain. (Sorry, Kylo, you aren’t it. And neither was Snoke, for that matter.) The Knights of Ren, however? These guys just exude an air of brutality, mercilessness, and fear. I cannot wait to see them in action in The Rise of Skywalker.

Another highpoint of Star Wars guesswork has surrounded Keri Russell and the character she’ll play. Many thought (or, more appropriately, hoped) that she would bring beloved Legends character Mara Jade to life. Instead, she will portray the “masked scoundrel Zorri Bliss.” The first-look image of Russell in The Rise of Skywalker shows her character in stunning detail. The photo also confirms the name of the snowy planet hinted at in the teaser trailer: Kijimi.

Final Battle Between the Jedi and the Sith

Perhaps the biggest reveal of the article is that the Skywalker saga will not just end. Rather, The Rise of Skywalker may very well see an end to the battle between the Jedi and the Sith. As the article notes, the stakes in the film are high. The First Order lost Starkiller Base and let the Resistance slip away at Crait. But…

[T]he takes go even higher than that, cosmically high. Sources close to the movie say that Skywalker will at long last bring to a climax the millennia-long conflict between the Jedi Order and its dark shadow, the Sith.”

Rey and Kylo Ren will most certainly factor in that battle, as seen in the images above. Further, we know from the article that the battle between the light and the dark likely won’t be going back to Tatooine or Jedha as originally thought. The desert locale we see in the trailer is apparently a planet called Pasaana.

As I said above, there is a lot more in this article to process. Stay tuned here to That Hashtag Show for a follow-up, and all your Star Wars: The Rise of Skywalker news!

Star Wars rumors are like the pieces to a giant … 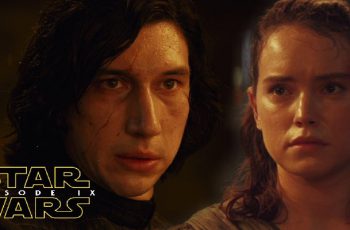 It’s easy to think about shipping at this time of …