One project Trekkies don’t have to wait for, the newly launched Star Trek: Dark Remnant virtual reality experience by VRstudios and development partner Strange Reptile.  Star Trek: Dark Remnant is described as “an interactive intergalactic experience that is now available to play nationwide, thrusting players into a perilous rescue mission alongside the Enterprise at the edge of Klingon space.” Since the 60’s Star Trek has always been ahead of its time, no pun intended, with its futuristic sounds and scores, setting new standards in the industry.  Tackling the sounds of this new VR project was the team at Hexany Audio, a Los Angeles based game audio studio offering custom sound design, music, voice over, and audio programming for games, and VR.  Below composer Matthew Car Earl and sound designer Alex Barhart divulge about their contributions to the new game. Read the exclusive interview here.

-Why do you think Star Trek has become such a global franchise? What do you think in particular resonates with audiences?

M: Well, the thing that stuck out to me the most about the Star Trek universe was the range of feels and emotions it carries. It is serious and dark while also being fun and light spirited. This is also reflected so well in everything like the story, art direction, dialogue, acting, and music. It all fits together so well. This is what resonates with me and I imagine other people are drawn by this as well.

-What about Michael Giacchino’s Star Trek score influenced you the most with your score to Star Trek: Dark Remnant?

M: Similarly, to what I was talking about how the Star Trek universe goes through a large range of emotions, Michael Giacchino’s score is such a wonderful parallel to this fact. I tried to capture this feel in the score to Star Trek: Dark Remnant. As for any one piece of the score, the main thing I quoted throughout the score was his main theme to Star Trek 2009. So many great motifs and themes in that piece of music and it was truly an honor to be able to work with the original music!

-We read in a previous interview that you said, “You tend to write VR music a little bit more underscored and ambient.” Why is that?

M: Here at Hexany Audio we do a lot of VR projects with VRstudios and Dave & Buster’s and I tend to keep it a bit more underscore because I feel like the point of VR is really to immerse yourself in a new world. Unlike a movie or traditional game score, the point of a VR score for me is to create mood and ambience. It was actually a difficult balance with this experience because the Star Trek music is traditionally so bombastic. I had to find a nice middle ground by keeping the music moody and ambient, but only using the orchestra.

-There have been a few Star Trek composers. This is a tough one, but which one is your favorite?

M: Oh man, that is really impossible to pick. I just can’t say. I really loved the orchestration style in the Jerry Goldsmith scores. The James Horner stuff is as always amazing. Though the main composer I was looking to for inspiration for this piece was Michael Giacchino, to keep it in line with the more recent film scores.

-Many times composers work with sound designers because there is overlap in projects. How much overlap was there for this game?

M: Not so much overlap as far as content goes. Music was music, and sound was sound in this project. Though I did give our sound team some drum tools that were later used in the UI sounds I believe. Though on the conceptual stage, there was a lot of discussion with our sound team here at Hexany Audio before starting on anything. So we were all on the same page on where music or sound would take the foreground.

-Sound wise, if you could narrow down one sound effect that is the most significant to the Star Trek universe what would it be? Did you incorporate that in Star Trek: Dark Remnant?

AB: For me personally, I remember growing up with my Dad who is a huge Star Trek fan and I remember catching scenes here and there as he would watch. I remember watching scenes and hearing the teleporter sound where they would beam each other to different places and thinking it was so futuristic and cutting edge. While it would not have made sense to use the original sound of the teleporter from the 1960s, the sound of the Enterprise is arguably more iconic for the show as a whole anyway. I was especially excited to get the chance to use the sound of the modern Enterprise coming out of warp speed and left it relatively untouched. Most of what I did was a little fidelity boost with some processing and I added some environmental layers to emphasize the explosive nature of it.

-The first Star Trek TV show aired in 1966 with pretty revolutionary sound effects. So many years later, how have you changed these to sound futuristic in 2019 for Star Trek: Dark Remnant?

With Dark Remnant I was lucky to use the newer sounds from the J.J. Abrams era of the universe, which was clearly descended from the original series. With that in mind, it gave me the freedom to pull from the nostalgia from the original series as well as draw on more modern sound design techniques and sounds. I tried whenever possible by starting from the original aesthetic but I found quite often I had to really stretch the boundaries of the sounds. Often with player based sounds the original movie assets didn’t have the punch and fidelity that really made the player feel powerful and that they were making a difference. I had to take a lot of liberties with the blasters and shields and sounds of that nature.

-What was the most challenging thing, sound wise, with this game?

Getting Star Trek to translate to VR was probably the most challenging part of the game. The IP already has an iconic sound so most of my work had some ground rules to follow so I had to figure out how to get take that sound and make it immersive. I had a lot of help from out technical sound designer Nick who made sure that the sounds I was creating worked in the mix. I had to design sounds knowing that there would be a lot of chaos happening around the player and still being about to hear the story through the dialogue.

-Doug Grindstaff was the original Star Trek sound editor. Can you tell us a few of his sounds that made it into the game?

The sounds we used in the game were from the J.J. Abrams 2009 reboot of Star Trek which were heavily inspired by the sounds from the original series. With that said, as I mentioned before, the Enterprise warp in sound is almost the same sound as the movies. It was simply too good not to use and a nice hit of nostalgia at a pretty cool moment in the game. Likewise, almost all of the sounds of the cabin computers and UI for the game started off using the sounds from the movies.

I took a lot of pride in trying to make the cockpit feel like it was in the Star Trek universe and having the computers constant humming and chirping away using the sounds did a lot to help. The red and yellow alert alarm sounds as well were pretty much straight out of the movies and really helped sell the immersion.

Dan Moore is a freelance contributor for That Hashtag Show. 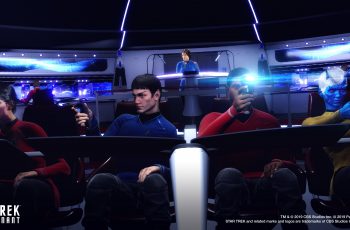