While this name may surprise some, it really does fit. Jango is just a simple man trying to make his way through the universe. Given his career, he has little time (and probably less patience) for a wife. Instead he takes advantage of circumstances and demands an unaltered clone of himself.

Now what makes Jango such a good father? Well, when you think of Jango as a simple laborer or blue collar worker, he does nothing more than teach his son the family business. Boba was simply learning dad’s job, which he learns really well despite losing dad as a youngster. Jango cared for Boba and taught him everything he knew. What else can you ask of a father?

This is a bit of a strange one. We know almost nothing of Ruwee, and we only see him at the funeral of his fallen daughter. All we have to do is look at the daughter he raised. How many dads can say they raised the youngest girl to ever become Queen of Naboo, as well as one of the most influential galactic senate members ever. We see nothing hands on, but I think the proof is in the product.

Okay, wait a second…how does a person forbidden from having children, thus having none, make it to #2 on the best fathers of Star Wars? As I said fatherhood goes well beyond DNA. The Jedi may have outlawed attachment, but how many Masters were father figures for their padawans, in this case Obi-Wan Kenobi.

I’ll be 100% honest here. Qui-Gonn doesn’t make the list if not for Claudia Gray’s latest book, Master & Apprentice. In many ways Qui-Gonn is one of hte best fathers because he is the most real. His relationship with Obi-Wan was like a modern father and son relationship.

Qui-Gonn taught Obi and trained him how he thought Obi-Wan should be trained. Of course Obi doesn’t always see the whys behind Qui-Gonn’s methods and questions them. They often have heated exchanges (for a Jedi anyway) because they see the world so differently.

A good example is lightsaber training. Obi is disappointed that all Qui-Gonn has taught him is basic form instead of other, more useful forms. Qui-Gonn tells Obi-Wan that he wanted Obi to be blindly fluent in it before moving on. Obi should know it without ever having to think about it.

Both think of themselves as failures to the other when in fact they are the perfect combination to help each other learn and grow. Qui-Gonn even has a chance to walk away, and let someone else deal with Obi-Wan’s training. In the end he knew his place was with Obi-Wan. I can think of no better example of an old school father and a more modern son. 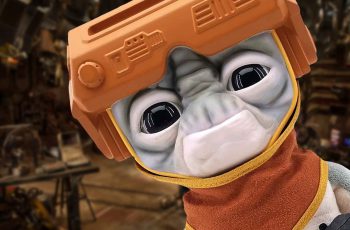