The new Child’s Play promises an experience vastly different from the original, and it delivers with Mark Hamill’s take on Chucky. However, the legendary actor was nervous about taking on such an iconic role. And it wasn’t his first time getting the professional jitters, either.

At a press conference for Child’s Play, the Star Wars actor confessed that he felt similarly daunted when he played the Joker. It just took a while for the nerves to set in, because he never expected to get the role. Hamill enthusiastically described the two similar situations:

“To tell you the truth, when I agreed to [Child’s Play] and it sunk it that they wanted me to do this, I felt intimidation like I hadn’t felt since I did the Joker. Because when I did the Joker, it was after the backlash of [Michael Keaton]. People mad before they even saw him: “Michael Keaton’s a comedy actor! He can’t play Batman.” So I thought when I auditioned for the Joker, there’s no way they’re going to cast this icon of virtue. Luke Skywalker as the Joker? Forget about it!”

Mark Hamill: Joker of all Plays

Since the part of Joker seemed so far out of reach, Hamill explained that he has no performance anxiety when auditioning. Of course, once Batman: Mask of the Phantasm, reality and anxiety set in. “Because so many people had expectations of what he’s supposed to sound like,” the actor said. It seems history has repeated itself when it comes to playing Chucky.

I didn’t feel that kind of intimidation until it sunk in that I was doing [Child’s Play], because the original had such a partisan following. There’s people saying, “You can’t touch this! You’re not Brad Dourif!” Which I agree, I love Brad. It’s a great responsibility, so I’m anxious to see how people react. Because it’s not the Chucky that we all know from before.

Indeed, a Cloud-operated robot toy programmed to know its owner better than anyone is a far cry from a serial killer trapped inside a doll. But while Brad Dourif gave many unforgettable performances as Chucky, Mark Hamill is sure to put his own spin on it.

Are you excited for Hamill’s take on Chucky when Child’s Play premieres on June 21st? Let us know in the comments below, and check That Hashtag Show for the latest news on your favorite films. 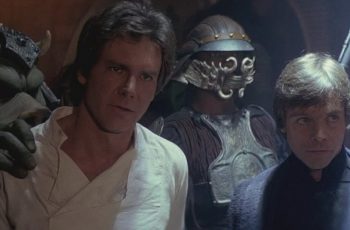 In a recent interview Mark Hamill said he wasn’t going …