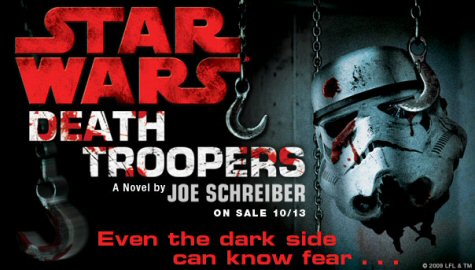 Star Wars: Death Troopers puts us on the edge of the Unknown Regions. The setting takes place aboard the Imperial prison barge Purge, headed for a prison moon. Purge is loaded down with five-hundred enemies of the Empire. Joining them are detachments of Imperial prison guards and Storm Troopers. The ship suffers a catastrophic engine failure and become stranded. Nearby, an Imperial Star Destroyer floats—seemingly abandoned—showing only a handful of lifeforms on board.

The Purge needs parts for repairs. The abandoned Destroyer has them. To get back underway, a small boarding party sets out to salvage her. What they find, however, is something they could have never imagined possible. The Destroyer, usually home to 10,000+ Imperials, is now home to something much more terrifying. A small group of survivors are left on their own. And… their actions could quite possibly determine the fate of the galaxy should this thing get out.

Put aside for a moment all the blather of what’s canon and what isn’t. Do you want just a plain ole’ thrill ride of a Star Wars story? This one is a top contender.

I caught up with Joe Schreiber this week and talked with him about his experience writing Star Wars lore and the impact of Death Troopers, along with his other novels. SPOILER ALERT: If you have not yet read the novel and don’t want to ruin some surprises, you may want to stop reading here. If you’re not worried about that, carry on!

THS: Thanks for speaking with us about Death Troopers! Our first question is, were you a Star Wars fan prior to your books?

JS: I was always a fan. I loved the original trilogy, especially Empire (Strikes Back), which is still the best of the bunch and holds up amazingly well, particularly all the Han and Leia stuff that Lawrence Kasdan came up with. I’d owned most of the Kenner action figures as a kid, although at that point my little brother had sold them all at a yard sale, a long time ago.

THS: What was the process like when the publisher asked yout to write your first Star Wars novel?

JS: My editor at Random House at the time was a very nice guy named Keith Clayton. I’d written a couple of horror novels for them at that point, and he told me they’d been kicking around the idea of Star Wars zombie novel, and asked if I had any thoughts. Eventually there were contracts signed, and then I had to come up with an outline—a formal outline—which was hard, because that’s not really the way I’m used to working, although it turned out to be a good idea.

The Joy of Writing Star Wars

THS: What was it like, for you personally, when you found out you were going to write in the Star Wars universe?

JS: It was super exciting. It was pure adrenaline. I was so grateful for the opportunity. I loved being handed the keys to that playground, and given what was essentially a free hand to do whatever I wanted, right down to the bizarre chapter titles, the original characters, and being able to put Han and Chewie in the middle of it.

THS: What inspired you to combine elements of the horror genre with Star Wars?

JS: To me it was a no-brainer. I’ve always been a horror guy, it’s kind of my native language, and not so incidentally, the scarier parts of Star Wars always resonated with me—the thing swimming around in the trash compactor, the sand people, and of course Vader himself, essentially a man walking around inside his own coffin. As a child, I couldn’t figure out what it was that made him sound that way, but I knew deep down it was something horrible.

THS: What kind of preparation/research did you have to do to write in the Star Wars universe?

JS: The good folks at Random House sent me an enormous box of reference guides. It’s extremely helpful that every aspect of that universe has been mapped out, named and cross-indexed, especially for someone like me who’s naturally weak on research and is more likely to just make it up as I go along. I also went back and revisited some of my favorite Sci-Fi/horror movies, and tried to figure out what worked so well for me—Alien, The Shining, The Thing—anything that played around with the kind of cavernous, hulking sense of isolation that I was trying to evoke on that old freighter.

“In the Star Wars family, Death Troopers is the weird uncle that shows up for Thanksgiving, has a few too many beers and starts telling the family secrets.”

THS: Over the years since Death Troopers was released, how has fan reaction been for you and the story?

JS: I’ve enjoyed seeing people discover the book over the years, since now the whole thing seems like such an oddity now, not at all the sort of thing they’d do these days. In the Star Wars family, Death Troopers is the weird uncle that shows up for Thanksgiving, has a few too many beers and starts telling the family secrets. That cover alone, with the bloody trooper helmet hanging on a hook… it’s hard to believe anybody signed off on that thing the first time around. The first time I saw that, I thought, boy, they’re not holding back.

THS: What about with Red Harvest and Maul: Lockdown?

JS: Red Harvest was an even weirder experience, just a very strange, uneven book. To this day, I’m not sure it works. On the other end of the spectrum, Maul: Lockdown was a blast because I got to set it on a prison planet, populate it with all these different species and creatures, and write an internal monologue for Maul, who sort of struck me as this blank slate, this kind of very existential, man with no name type character.

THS: Finally, have you ever received any feedback for Death Troopers from Lucasfilm? Obviously they liked it, since it became a novel. How did they react to Star Wars getting a horror novel?

JS: Well, of course, they had to sign off on the whole thing before I sat down and started writing. I’m honestly not sure how involved they were in the process, compared to Random House, who were the people I mostly interacted with. They were a dream to work with, very supportive throughout the whole process, and very smart. The whole thing was just a ridiculous amount of fun. I’m not sure how Disney feels about it. I’m not holding my breath for the theme park ride!

Death Troopers: A marriage of horror and Star Wars

Star Wars, in general, has always been somewhat lighthearted and campy. George Lucas has even said of his prequel films that he made them for twelve-year-olds. With this story, that is not the case, as Death Troopers explores the darker side of the dark side of the Star Wars universe.

For the record, it’s probably a fair assessment to assume a theme park ride based off of Death Troopers would be fricken’ awesome! In case you’ve ever wondered if this would be something the fandom would like, the concept of “Zombie Storm Troopers” ignited an entire legion of convention cos-players to take on the persona, like these two below:

Also, thanks to 5ive by 5ive Studios and members of the 501st Legion, we even have this hauntingly-cool Death Troopers book trailer video, too:

This is from 10 years ago. Why are we talking about it now?

Part of the reason this book has become popular again is not just because it’s a good story. It is that, and then some. Somewhere out there in the land of Internet, a small faction of the “Make Solo 2 Happen” crowd is rallying for Death Troopers to be the basis of a possible sequel film. Even though it doesn’t include Maul and Crimson Dawn, it’s not hard to see why fans would get into this one with gusto, with Chewie and Han fighting zombies on an abandoned Star Destroyer.

Back in 2014, TheForce.Net also interviewed Joe about Red Harvest, another horror novel in the Star Wars universe:

Looking back, there was probably some stuff in Red Harvest that could’ve been dialed back, scenes where the zombies were building a barrier by chewing up people and spitting out their flesh build a kind of wasps nest of congealed skin. That probably could’ve been toned down. Oh well. In general, my tendency is to go as far as I think the scenario warrants, rather than deliberately holding back. Otherwise what you’re getting is a kind of watered down attempt, and that’s even worse.

That Hashtag Show would like to thank Joe for his time and wish him the best on future stories! He is the author of three Star Wars novels; Death Troopers, Red Harvest, and Maul: Lockdown. All titles are available at all major booksellers and online. Follow author Joe Schreiber on Twitter: @JoeLesterthecat and stay with thathashtagshow.com for all your Star Wars news! 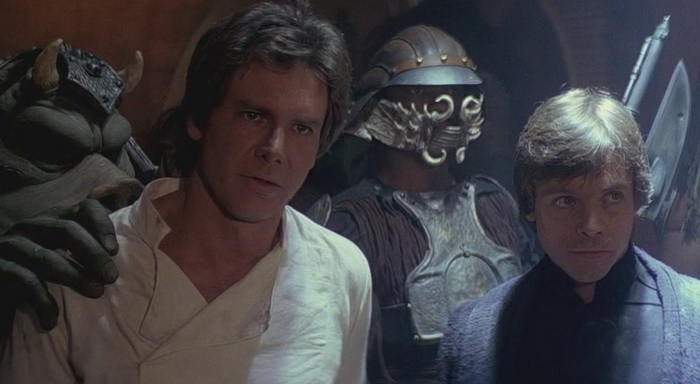 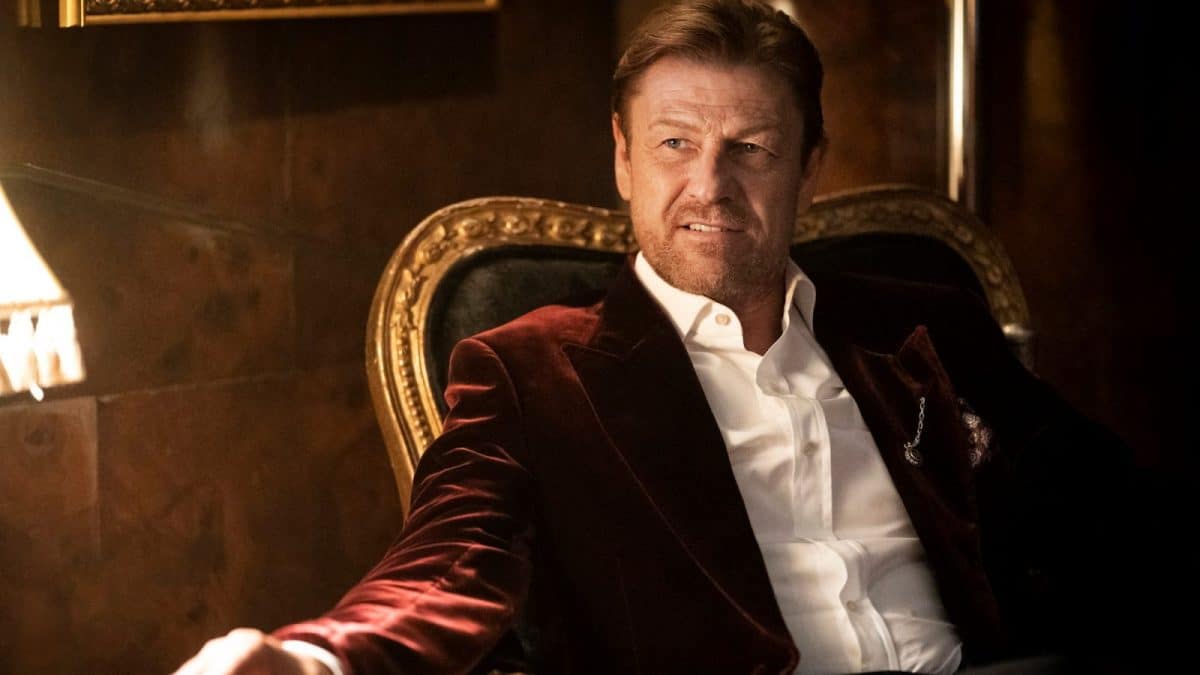 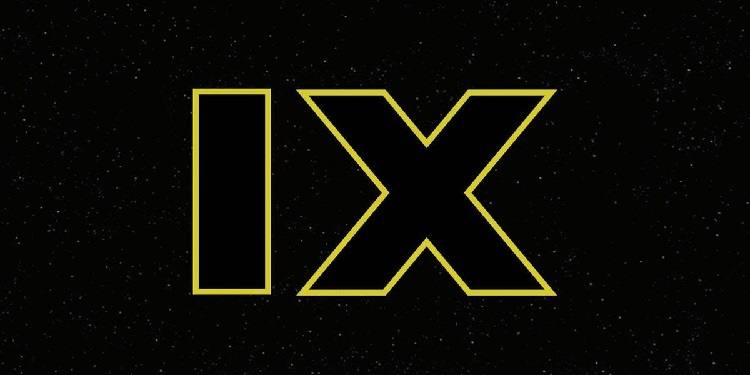