“Joe Hill’s vision for this new line is incredibly exciting,” says DC Editor-in-Chief Bob Harras. “Bringing in new and well-known creative voices with different backgrounds to tell their thrilling and terrifying tales, mixed with the energy around the horror genre at large—it all makes it a great time to be a fan of DC.”

“We’re so happy to welcome Joe Hill to DC, and to partner with him on this new specialty line of creator-owned horror books,” says DC Publisher Dan DiDio. “Horror has been such an integral part of DC’s history and it’s a tradition we want to see revitalized. As a lifetime fan of horror, I know fans are going to be so excited when these books hit shelves. I can’t wait.”

Hill House Comics will get its first spotlight at this year’s San Diego Comic-Con, with a panel hosted by Hill and Doyle, with other special guests. The panel will be held Friday, July 19, at 4:15 p.m. in room 6DE.

The rain lashes the grassy dunes of Brody Island, and seagulls scream above the bay. A slender figure in a raincoat carries a large wicker basket, which looks like it might be full of melons…covered by a bloodstained scrap of the American flag.

This Hill House Comics story focuses on June Branch, a young woman trapped with four cunning criminals. They’ve snatched her boyfriend for deranged reasons of their own. Now she must fight for her life with the help of an impossible 8th-century Viking axe that can pass through a man’s neck in a single swipe. Oh , it also leaves the severed head still conscious and capable of supernatural speech.

Each disembodied head has a malevolent story of its own to tell. It isn’t long before June finds herself in a desperate struggle to hack through their lies and manipulations… All the while she races to save the man she loves before time runs out.

A mysterious plague is afflicting the small mining town of Shudder to Think, Pennsylvania. It strikes seemingly at random, eating away at the memories of those suffering from it. Tales of rabbits with human eyes give way to deer women who come to the windows of hungry girls at night. This town is one of those places where strange things are always happening. But no one ever seems to question why…

THE LOW, LOW WOODS is a gruesome coming-of-age body-horror mystery series about two teenage women trying to uncover the truth about the mysterious memory-devouring illness affecting them and the people of the small mining town they call home. The more they discover, the more disturbing the truth becomes. 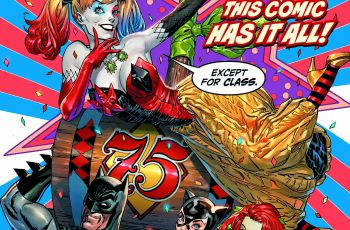 For four years and multiple artist/story crews, fans enjoyed the …

The DC Universe streaming service will be launching sometime this …