HA!  Sure!  But, good luck finding it for that price! I had to drive to 4 different comic stores to find one! Ebay had issues going for $50 almost immediately.  This is it people… THE LAST ONE!!!!!

Well, other than the fact that it’s the final issue, Kirkman has pulled the rug out from fans and comic-shop owners alike. Soliciting this issue as the start of another arc with many more issue to come, it wasn’t until the day before the issue hit the stands that creator Robert Kirkman took to twitter to reveal this was the final issue for the series. That left stores with only their normal order for the series. Without prior warning of how important this issue was, stores across the globe only ordered a standard amount! Therefore they were not ready with extra stock for the huge run fans would demand. And so, the first printing of Walking Dead #193 sold out in seconds.

This comic serves as a sort of trip around the world that Rick has created, The Commonwealth, two decades after he was shot, as we check in on the survivors and what they and the world are up to, as the comic comes to an end.

The final Walking Dead comic opens with an adult Carl killing a walker that has wondered onto his farm. We quickly learn that it belongs to Hershel, Maggie and Glen’s son, who runs an “educational” scare-show/circus with sanctioned walkers. Maggie is now the president of the commonwealth and neglected Hershel as a kid, basically spoiling him when she could and being a missing-mom the rest of the time, so he’s pretty much a jerk.  Carl doesn’t like him or the show, thinking the whole deal is dangerous so he kills all the walkers Hershel has. Carl then goes on a “run” with Lydia, which is more or less a tour of the commonwealth, showing how America is slowly pulling itself together, reuniting the coasts in the middle by train, engineered by Eugene. The commonwealth has been successful and everyone holds Rick as the hero who made it all happen.

We check in on a lot of characters here; Laura hates Rick and that everyone hails him as a saint, Jesus and Aaron live on their boat, and most importantly, Negan is still kicking around, hold up in a plantation house with a grave for Lucille out in front. No on ever sees him, but Carl still takes him supplies and wants to talk to him.

The story continues with Hershel suing Carl. There are a couple of trials, some more easter eggs and check-ins, and it all comes down to Judge Hawthorne, AKA Michonne, who dismisses the case and drops the charges against Carl citing Rick’s speech about civilization having to face certain death to find out how to live again. Carl takes one last look at the stature of his dad, Rick, on the steps of the courthouse after being razzed by some snotty kids. He goes home to his family where he reads a book about his father to his daughter, Andrea.

And that’s how Walking Dead ends.

The story, at least.  In a final letter, Robert Kirkman has one final tease, a PS that states Negan Lives… meaning that there might be more story to tell, someday.

Being a thief is a lot of hard work and … 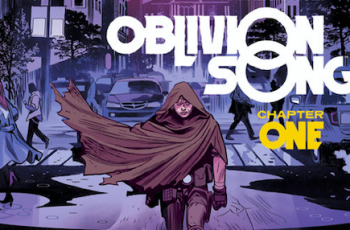