We can never get enough of Darth Maul, right? And after Solo: A Star Wars Story that has become even more true. While it is still to be told if we will get a sequel or not to Solo. At least we can still get bad ass figures that can help fill our Maul fix.

Darth Maul is back

That’s right Hot Toys has unveiled their: Solo: A Star Wars Story Darth Maul Action figure. This 1/6th scale figure looks amazing with outstanding details to make this figure look like it jumped off the movie screen and into your collection. You even get a detailed look as his new robotic legs. Here are some of the details that Hot Toys have on their new Darth Maul figure:

Surprised many Star Wars fans with his appearance in Solo: A Star Wars Story, audience discovered that the deadly Darth Maul has survived to build an empire of his own as the true leader of Crimson Dawn. Operating from his homeworld of Dathomir, Maul commanded the crime syndicate with the help of refined figurehead and terrifying enforcer Dryden Vos, who traversed the galaxy on his lavish yacht entertaining and brutally imposing the will of his master. After his death, Dryden’s first lieutenant Qi’ra assumed control over the territories, working closely with Maul to continue their rule.

Skillfully crafted based on the appearance of Darth Maul in the film, the new 1/6th scale collectible figure features a newly developed head sculpt with stunning likeness, finely tailored outfit and robe, highly detailed robotic legs, Maul’s iconic double-bladed lightsaber with LED light-up function and interchangeable lightsaber blades emulating the weapon in motion, a selection of interchangeable hands for posing options, a specialized seat for Maul and a figure base.

I am excited about this Darth Maul figure. With Solo: A Star Wars Story being in my top five STAR WARS movies how can I not be excited. Yeah, we have to wait some time for its release but it should drop sometime in Q4 2020 or Q1 2021.

What are your thoughts about this Darth Maul figure? What other figures would you like to see from Hot Toys? Well we want to hear from you. You can do that by hitting us up on Twitter @thathashtagshow and myself @starwarsnerd574. You can also comment from this article as well. Also make sure to stay up to date on all the Star Wars news by following us at ThatHashtagShow.com. I can’t wait to see you all next year at STAR WARS Celebration.

Rumors have drifted around that Darth Maul’s role was originally … 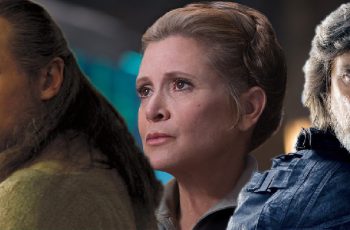 Star Wars is full of tragedy. I suppose that’s to …