Power Rangers Beast Morphers is getting close to premiering back in the US. The International Spoilers are still happening for the rest of the episodes for the season. And the spoilers for Episode 13 have been released online.

Episode 13 – Tuba Triumph
Airdate: TBA
After witnessing a boy being bullied, Ravi takes him under his wing.

SPOILERS BEYOND THIS POINT

Ravi sits in the park drawing sketches, while a boy named Joey sits nearby playing his tuba. When Zoey comes by, Ravi immediately hides his sketches to pretend he’s doing something else.

Joey soon gets bullied for being a tuba player, and he decides to put his tuba in the trash out of sadness. Ravi witnesses the entire incident, and goes up to Joey. He tells Joey to be who he really is, and offers to teach him karate lessons later.

Roxy comes by and turns Joey’s old tuba into Tubatron. Roxy gives him a mission: collect the final cheetah data Evox needs. The Rangers show up to fight Tubatron and Roxy. After battling, the evildoers retreat.

At Riptide Gym, Joey shows up for his karate lessons. Joey reveals that he wants to learn karate to beat up his bullies. But Ravi informs him that’s a mistake, and karate is only to be used as a form of defense. The two train, but Joey struggles to learn certain moves.

Joey discovers Ravi’s sketches. Ravi reveals that he doesn’t want others to know about his sketches, or they’ll think he’s distracted from his training. But he does have a gift for Joey – his grandpa’s old tuba. Ravi teaches Joey to take tuba training back up, and the lesson of never being afraid of who he truly is.

Nate’s technology detects tuba noises in the park, and the Rangers rush over thinking it might be Tubatron. It turns out to be Joey practicing, but Tubatron actually does ambush the Rangers.

The Rangers can’t beat Tubatron’s soundwave blasts, but Joey comes in to play his tuba – with his soundwaves canceling out Tubatron’s. This allows the Rangers to win.

Scrozzle releases a Gigadrone, but the Rangers win. Tubatron is unsuccessful in capturing the final cheetah data.

Back at Riptide Gym, the Rangers hang out with Joey for saving the day. The bullies from earlier walk in to bully Ben and Betty, but Joey stands up for them. He fends off the bullies by finally mastering the karate moves he was struggling with earlier.

The Power Ranger: Beast Morphers episode ends as Joey reveals he took one of Ravi’s sketches from earlier. It’s a drawing of Ravi and Roxy together. Joey framed it as a thank you, and teaches Ravi the same lesson back – never be afraid to be who you truly are.

Power Rangers Beast Morphers is set to debut in February … 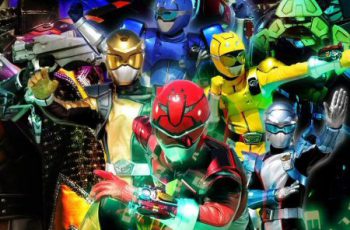 That’s RIGHT ranger nation! Hasbro and Nickelodeon has dropped a …