Nekrotronic comes to us from Australia by film-making siblings Kiah and Tristan Roache-Turner, creators of Wyrmwood: Road of the Dead. The film gives a fresh take on the popular science fiction plot of a Hell-on-Earth scenario. It does so with a fun, technological ghost-busting twist.

Nekrotronic introduces us to Howard North, a down-on-his-luck sanitation worker that is accidentally thrust into an age-old conflict via a cellphone game between Finnegan (Monica Bellucci)—an evil demon who absorbs people’s souls to sustain her power—and the Nekromancers, a family of hardened demon hunters. When Howard finds out the truth behind Finnegan’s past, his connection to her, and her dark plans for the future, he teams up with his new friends to discover he is the ultimate Nekromancer, the only one with the power to defeat her and save the world. Check out the trailer below:

The Cast is Fun

There is immediate chemistry between Howard (Ben O’Toole) and his work buddy, Rangi (Epine Bob Savea). Sometimes Savea even steals the scene with comedic timing at inappropriate moments. Likewise, Tess Haubrich as Torquel counters her on-screen sister Molly, played by Caroline Ford, with a similar mix of mouthiness and bad-assery. However, they don’t have the same on-screen connection as Howard and Rangi.

In Nekrotronic Bellucci gets her first role as a bona fide “bad guy”, with a good amount of screen time as Finnegan. She’s a demon queen that’s figured out how to play the world’s cell phone addiction into a bid to consume our souls through the Internet. (Doesn’t it already do that?). Wenham, on the other hand, is there at the beginning but exits early at the hands of Finnegan when his rescue attempt of Howard goes wrong.

Though they are not groundbreaking, the weapons are cool, especially Wenham’s tri-barrel, demon-blasting shotgun. Plasma rifles are nothing new in film either, but the CGI and sound effects on these are well done. The runed anti-possession armor is pretty nifty, too. In all, they are a step up in design from your standard sci-fi flick. The tech, however, is the fun part.

Demon souls are trapped in these little boxes that, when run through the system by a Nekromancer, regenerate them into form by using a 3D body printer. Afterward, Nekrotronic scores again with more, well-done creature effects, especially Finnegan in full demon form. They have realistic movement and expressions without the tell-tale rubbery bounce of a Godzilla costume. Put a human soul through it, and you don’t know what will come out.

Will it win an Oscar? No, certainly not. But that’s the best part about it. You don’t have to think about anything when watching this. You can sit back and enjoy a fun movie experience without the bog of deep backstory, tangled plot lines, and brooding characters. It gets right into the action and keeps it there through a mix of good CGI, creature effects, gun-slinging combat, and flashy tech. If you’re looking for a fun blend of horror, science fiction, and comedy this weekend, go see this film. 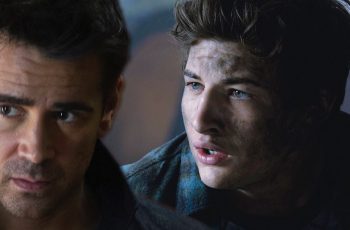 Most of us read William Golding’s Lord of the Flies …

Every medium has produced great and awful science fiction, and …