According to Variety, Arrow star and professional wrestling fan, Stephen Amell has landed the lead in a new mini-series Heels on Starz. His run on Arrow ends this year and this will be his first show after his long tenure as the bow wielding hero. Amell also has experience in pro wrestling before this show. Including multiple matches in WWE, Ring of Honor, and All Elite Wrestling. He’s shown a propensity for the ring before. So this show is a perfect blend for him.

The story of the show is that of two brothers, one who is a face, and one who is a heel, Jack Spade, played by Amell. The drama unfolds in front of their fans and behind the scenes as they deal with the death of the father. A Georgia-based wrestling promoter. This echoes the real-life dynamic of the Rhodes brothers themselves as they make their way through wrestling and life without their father, Dusty Rhodes.

Heels is written by Michael Waldron and Mike O’Malley as the showrunner. The show at one point had CM Punk attached as one of the leads but his MMA broadcasting and fighting career got in the way of it. There’s no confirmation whether he’ll be returning to the show in a capacity or not.

Amell has proven himself to be more than capable in the ring. He’s had matches with: Neville (Now Pac in AEW), Cody Rhodes, Christopher Daniels, and the Bullet Club (Young Bucks, Omega). Normally a celebrity appearance in a wrestling ring just means a promo getting cut back and forth. Rarely does someone get physical like Amell has. His training and love of wrestling made it easy for him to get in the ring. He’s had basic matches with great wrestlers who can carry him. His athleticism was on point more than once, especially his dive in his Summerslam match against Rhodes.

Finally, Rhodes reached out to Amell on Twitter congratulating him on the news. Amell also asked if Rhodes would like to be apart of the show in some capacity with Cody giving him an emphatic “yes”. So that’s another piece to keep track of. With AEW on TNT debuting on October 2nd of this year, could Amell make an appearance to hype the show? He seems to be very good friends with Cody Rhodes, so I wouldn’t cross anything off.

For more wrestling and entertainment news, reviews, and ramblings, check back to That Hashtag Show and follow us on Facebook! 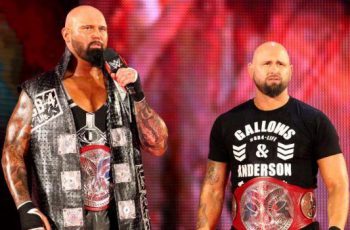 Black Lightning was one of the biggest DC hits for …