Everybody loves a good Easter Egg… am I right? And we can’t seem to get enough of Avengers: Endgame Easter Eggs at the moment. The latest one to crop up on our radar involves your Friendly Neighborhood Spider-Man and possibly Gwen Stacy.

Welcome to The Multiverse.

Into the Spider-verse was released last year and as a result introduced the world to the concept of the Multiverse. Within these different dimensions are a number of different versions of Spider-Man. First and foremost we meet Miles Morales and furthermore Gwen Stacey who play Spider-Man and Spider-Gwen within their own alternative dimensions. An instant hit after its initial release in 2018, Into the Spider-Verse left audiences desperate to know more about the multiverse. Consequently with the praise Tom Holland and Shameik Moore have received as Spider-Man, it seems only natural for the two popular characters and their counterparts to meet at some point.

Having just hit digital platforms, Endgame is going from strength to strength right now. The beauty of owning a copy at home is the chance to have another watch at your leisure and as a result, pick out things you may have missed out on your first (or second, third, fourth…) viewing at the cinema. As previously said, everyone enjoys a good Easter Egg. Re-watching the scene where Peter reunites with Ned Leeds; a Redditor believes they may have noticed none other than… Gwen Stacy. ComicBookMovie.com points out that a blonde girl with a hairstyle similar to that of Gwen, can be seen in the corridor. This girl is wearing a web print skirt, similarly carrying a pink backpack, which, as someone back over on Reddit points out, looks suspiciously similar to the ballet shoes Gwen sports… Could it be too much of a coincidence?

Is this the MCU gearing up for a Spider-Gwen/Gwen Stacy appearance. As a result of its success Gwen is set to star in the Sony sequel to the Spider-Verse. Then there is the news of a standalone Spider-Gwen film, (HOW exciting?!) Which makes it entirely possible that this Easter Egg WAS deliberately planted. However, upon hearing recent news that Marvel will no longer be working alongside Sony to produce anymore Spider-Man films, it seems like a missed opportunity. This is a shame, as Gwen was such a hit after her debut in Into the Spiderverse. Furthermore, I am always up for more awesome female heroes – especially ones as sassy as Gwen. How about you? Would you be disappointed to miss out on Gwen Stacy’s introduction to the MCU? Let us know in the comments below.

Social media certainly does bring people together. In this case, … 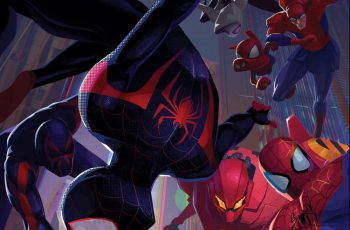 Now that Miles Morales has had some time to relax …