As I sit typing this, Iron Maiden is currently embarking on their Legacy of the Beast tour. Legacy of the Beast is Iron Maiden’s mobile game. If you didn’t know, Iron Maiden rule the world. So because their Los Angeles show is coming up; what better time to write a review of all sixteen of their albums leading up to it. Their show is Saturday, September 14th at the Banc of California Stadium. So every work day (including one day with two), there will be a song-by-song Iron Maiden album review. Over the weekend it was Powerslave. Today, because Eddie never sleeps, even for Labor Day, it’s Somewhere in Time.

After the grueling World Slavery Tour in support of Powerslave, the band was mentally, physically, and emotionally drained. Their management wanted them to tour even more for the release of Live After Death. Bruce Dickinson threatened to quit if they forced them to. A six-month break was in store for the band. That six-months turned into four months very quickly.

During these four months, Dave Murray and Steve Harris would be experimenting with new guitar equipment. Some of this new equipment would change the sound of Iron Maiden for the next two albums. Guitar synthesizers were added and it resulted in a similar sounding metal/rock sound, but with a different feel. So-called “Iron Maiden purists” would reject this change. Real fans would welcome it with open arms.

The songwriting on this album was markedly different than the past three. Bruce Dickinson, exhausted from the past tour, wanted the band to make an even better album to one-up Powerslave. He felt they needed to do this or else they would just wither away and die. Steve Harris and the rest of the band had other ideas. Bruce wouldn’t receive a songwriting credit on the album. To pick up that slack, Adrian Smith went into overdrive. He wrote the two singles for the album, “Wasted Years” and “Stranger in a Strange Land”.

As for the rest of the album, the band didn’t mean to have the overall theme of time and space, it just happened that way. Nonetheless, this album has a lot to unpack, so let’s get to it.

Right off the bat, you know this is going to be a different Iron Maiden experience. The guitar synthesizers are right in your face. For this album, if it weren’t the first with such a radical sound change from the band, I wouldn’t pick this to lead the album. In context though, it’s the perfect opener. The song starts off slowish with the synths and then goes into a full on Iron Maiden rocker.

Some have said that Iron Maiden wrote a concept album with this one, but I don’t think that’s necessarily true. This song can have a bunch of different meanings to it. My best guess is someone time traveling to change their past or future and they get stuck in a deal with the devil. Either way, it’s a rocking tune that has ripping solos from Murray and Smith. Great start to this album.

It’s a shame that this is the only song that Iron Maiden regularly plays from this album. But that gets made up for because this song is one of their best. A true classic in every sense of the word. A wonderful sing-along song for the band. It tells the story of nostalgia, wasted time, and understanding that you need to live in the present and not the past.

It’s a song that I’ve listened to many times when feeling down or when I’ve been regretting something. Adrian Smith pours his heart and soul into this track. His solo on the song is legendary. The synthesizers fit this track particularly well. Another highlight is Bruce Dickinson’s vocals. If you ever get the chance, take a listen to his isolated vocal track and you’ll crap your pants. It’s like hearing God himself.

After the emotional journey that is “Wasted Years”, you need a real pick-me-up in the form of “Sea of Madness”. Starting off with a blistering guitar riff, it kicks into high gear with more of those trademark Bruce siren vocals. There really isn’t anyone like him in the vocal department. Another track written by Adrian Smith, it seems like the synths and source material invigorated him on this album. I can’t give you a good idea of what the song is trying to say, there are a varying amounts of interpretations. But that doesn’t detract from the song. If Iron Maiden every plays songs off this album live, I wouldn’t mind hearing this one.

Speaking of playing live, this is one of those songs that’s masterful on the studio record, and even better live. They haven’t busted this one out in over ten years, but it’s a treat when they do. The song itself is an epic telling of someone’s soul leaving their body during a horrible accident. He goes through what it’s like to see Heaven and Hell and the entire time he repeats to himself “Heaven can wait”. Almost like he’s fighting to get back to Earth, he finally feels his body back again. Or maybe it’s a new body and he’s being reborn again. The song ends there, letting you decide.

The middle section beginning at 3:32 is incredibly beautiful. During this portion live, the band brings on Iron Maiden fans and locals to sing along with the song. It’s a section that will shake you to your core before you get ready to go back to the shredding and ripping solos of the song. This is a perfect track from the band.

Track 5: The Loneliness of the Long Distance Runner

Following up “Heaven Can Wait” would be difficult for almost any other song. “Loneliness of the Long Distance Runner” is quite literally about someone running a marathon. It could be a metaphor for life itself, this whole album seems to be up to the listener’s interpretation. In life you have to keep running like this marathon runner. You can’t give up. Iron Maiden could have given up after the World Slavery Tour, but they didn’t. It’s a persistence that they’ve shown throughout their history. It’s a wonderful follow-up to the power of the last track while building upon itself.

Track 6: Stranger in a Strange Land

Now we’re up to, depending on the day, my tied for favorite Iron Maiden song. Based on an 1800’s explorer’s notes on how he was lost and died in the North Pole. Through what Iron Maiden does best, they take a historical event, spin it in their own way, and add new meaning to it. Sure, it’s about the explorer at a base level. But it can go deeper than that. I’m sure it does for Adrian Smith. During the Ed Hunter Tour in 1999, Iron Maiden performed this song for their first five dates. Adrian Smith’s father passed away suddenly and they’ve never played it since then.

A song that is powerful and rocking but also has a slow section that builds up to an insane solo by Adrian Smith in the style of “Comfortably Numb” by Pink Floyd. It’s the only track on the album without synthesizers and it’s also the only Iron Maiden song to fade out at the end. Give it a listen.

If this is the weakest song on your album, go get a recording contract. “Deja Vu” might have some silly lyrics about the phenomenon Deja Vu. But what it lacks in the lyrical department it makes up for musically with the great guitar play by Dave Murray. This one was co-written by him and Steve Harris. Another song about the passage of time and how it seems to repeat itself. There’s not much to say about this one because it’s the weakest song on the record but it’s not weak in a way that brings it down.

Iron Maiden and Steve Harris have a knack for leaving their most epic and best songs for the end of their albums. Following in that lead of “Hallowed Be Thy Name”, “To Tame a Land”, and “Rime of the Ancient Mariner” is this song. One that fans of the band have long clamored for them to play live. All we have is the studio track for now. Starting off with masterful guitar and drum work. You’re transported to the feet of a Macedonian soldier marching. Then the song picks up and you’re being told the story of the Macedonian King.

A song that evokes the time of Alexander with the guitar tone and the lyrics. I can imagine that Maiden doesn’t play this one live because the lyrics would be extraordinarily difficult to sing live. Either way this one goes down in history as probably the most wanted song for Maiden fans. They all want to see it on those setlists when the band does a new tour. It wraps up this album in a perfect way.

This album is my favorite Iron Maiden album. So I’m going to be a bit biased when reviewing it. For those fans out there that don’t think Maiden needs synthesizers, you can shove it. This album 100% belongs with the pantheon set up by their previous three albums with Bruce Dickinson. It could be seen as a concept album but the next album takes that mantle. The whole album is devoid of filler, crap, or horrid songs. It plays from track 1-8 perfectly. A relic of the time period, Maiden had long been quoted saying that “synthesizers don’t belong in rock”. Well they proved themselves wrong.

Derek Riggs really outdid himself with this album art. It’s filled with allusions, callbacks, easter eggs, and references to Maiden’s past. Going through all of them would be exhaustive. This is my favorite form of Eddie. He’s gone full Blade Runner badass and looks the coolest he ever has. A dystopian futuristic city sets the backdrop for the entire album.

I’m giving this one a 10/10. It’s on par with Number of the Beast from a quality standpoint. Tracks like “Heaven Can Wait”, “Wasted Years”, and “Stranger in a Strange Land” can compete with any other Maiden classic. It’s an album that I always find myself coming back to no matter what. If you haven’t listened to it or haven’t picked it up in awhile, you really need to.

Iron Maiden would go on to more experimental themes with their next album. Taking a theme like time, space, and life, they would build upon that with the Seventh Son myth. A story that’s told over the course of their next and seventh album, Seventh Son of a Seventh Son. Bruce Dickinson would find himself revitalized by the album’s source material and would get writing credit for four songs on the album. Eddie and Iron Maiden would have to do a lot to top this album, find out tomorrow for the next review.

For more Iron Maiden, heavy metal, or just general pop culture news, reviews, or anything else you can think of, check back to That Hashtag Show.

All audio and images are courtesy of Iron Maiden. 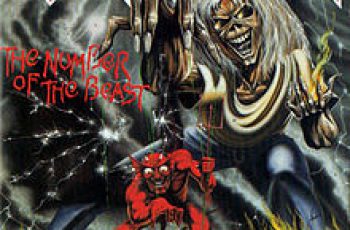 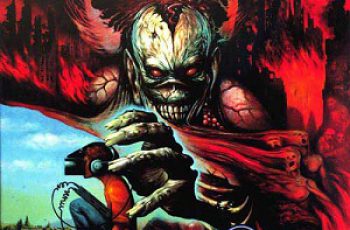