Christmas is now exactly three months away. If you haven’t already, it’s time to start shopping! This year though, forget the chocolate. Forget the inspirational sayings. If you’re a Star Wars fan, there’s only one way to count down to Christmas. Yes, after giving us a gargantuan Imperial Star Destroyer, LEGO has once again come through: Behold this year’s LEGO Star Wars advent calendar!

This year’s offering has a little bit of everything from the entire Star Wars saga. From C-3PO and R2-D2’s escape pod from A New Hope, to a prequel era battle droid, to Poe Dameron’s X-wing fighter, there is something for fans of every generation. Lego once again captures the essence of Star Wars in all its miniature glory. This Star Wars advent calendar is sure to please children and adult LEGO collectors alike.

Though the set heavily emphasizes the sequel trilogy with nine pieces, there are plenty of throwbacks to the rest of the franchise. Perhaps my favorite piece is the Gonk droid fashioned as a Christmas gift, complete with bow! Not to be outdone there, the LEGO Star Wars advent calendar even contains something that appears to be a cyborg mynock. (A new creature from The Rise of Skywalker, perhaps?)

From The Empire Strikes Back we’re treated to both a Bespin Cloud Car and its pilot. The ion canon from Hoth is also a nice touch. The folks at LEGO Star Wars even demonstrate their senses of humor with the set. The Star Wars advent calendar also includes a Chewbacca mini figure feasting on roasted Porg, complete with campfire!

All in all, this LEGO advent calendar includes seven mini-figures (eight if you include a Porg in a Santa hat), and contains 280 pieces in total. It is available for $39.99 at the online LEGO store HERE, or at Amazon and other retailers, now. Act soon, though; this is sure to sell out quickly.

Merry Christmas, and may the Force be with you! 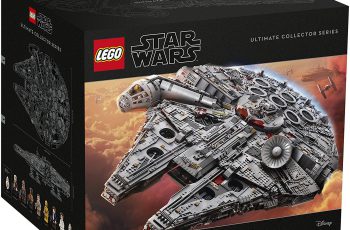 Black Friday is upon us, and the number of stores …

Now that we are into August, there are a whole …