This year’s Halloween Horror Nights at Universal Studios is all about Nostalgia for me. Sure, they’ve got some houses based on newer properties like Stranger Things, but for me, the excitement came from the houses based on Ghostbusters, Creepshow, and the 80s cult hit, Killer Klowns From Outer Space. If you’re a horror fan and you’ve never seen this movie, you need to. Immediately. I’ll wait.

Alright, so now that you’ve seen it, you know that this movie is all about the camp. Though, I’d hope you would have been able to figure that out just by the title. . . So, when I heard that Universal was turning this classic into a Haunted House, I knew it would be at the top of my list.

Before I get into talking about the house itself, I want to file a small disclaimer. I don’t scare easily. Especially not in haunted houses. In the past, I’ve worked for both Bush Gardens and Universal Orlando as a scare-actor. So for me, most of my enjoyment comes from the spectacle. Sure, every once in a while someone will catch me off guard and I’ll get startled, but is that really the same as being scared?

Anyway, back to the house. . . It. Is. Amazing. The costumes are spot-on and the recreation of some of the best scenes from the movie are absolutely on point. One of my favorites is the Shadow Puppet Klown.

While nobody actually gets eaten by a Shadow Puppet T-Rex, the effect is still really good and a lot of fun to watch. As you progress through the maze you also wander into a room full of cotton candy cocoons and a room at the Police Station where Captain Mooney has been turned into a ventriloquists dummy.

You can see some of my highlights from the Killer Klowns From Outer Space house in the video at the top of this post, but if you’re in the LA or Orlando area, you really need to see it in person.

Halloween Horror Nights at Universal Studios is open select nights throughout the rest of September and all of October. You can check out the schedule and purchase tickets for Hollywood here or for Orlando here. 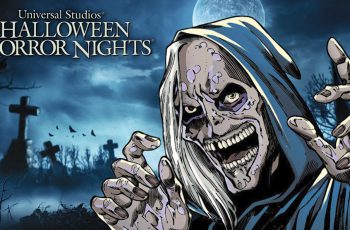