This Review is Spoiler-Free. So Read With No Fear!

I’ll start this review off with the obvious. Joaquin Phoenix deserves every accolade coming to him for his performance in Joker. The man went through every length he could to give the best acting performance in the role of the Clown Prince. Heath Ledger was long considered to be the best Joker. Jack Nicholson was also an incredible Joker for the Tim Burton film, Batman. Joaquin Phoenix takes the cake here. And not in a way that outshines or outdoes the Ledger performance. They’re two completely different entities.

Getting that out of the way first, Joker was a magnificent film that should stand as one of the years best. Todd Phillips and Scott Silver wrote a tight screenplay and it shows in the final product. That’s not to say this is some sort of superhero fest that glorifies the violence and mentality displayed by it’s main character. Arthur Fleck is not someone that you should aim to be. Joaquin Phoenix gives a performance that makes you feel pity for the mentally unstable man. But that doesn’t mean you should want to be him. That’s a big difference that I’m certain people aren’t seeing. Most of the comments that people are making about the film being dangerous are from those who haven’t watched the film.

Let’s get into the real meat of the movie. Aside from Joaquin Phoenix, who’s in this film. Being a character study of Arthur Fleck, you need some great performances surrounding him. Robert De Niro stars as late night host Murray Franklin. Zazie Beetz stars as Sophie Dumond who lives down the hall from Arthur. Frances Conroy plays Arthur’s mother, Penny. Finally Thomas Wayne, yes, that Thomas Wayne, is played by Brett Cullen.

What Makes the Film Unsettling

Joker at it’s core is a highly unsettling film. It’s beautiful in it’s depiction of the scum, grime, violence, and poverty of Gotham City. But it’s one of the most unsettling films I’ve seen. Todd Phillips and Joaquin Phoenix grab you and never let you go from the character of Arthur. The entire film is shot in such a way that nothing is wasted. The whole time you’re sitting watching the movie, you’re on edge. Whether it’s Arthur entertaining a small child on the bus to a deeply disturbing scene later in the film, it’s a hell of a ride from beginning to end.

Gotham City is just as much of a character to this film as it is in the Nolan Batman films. The Gotham in this film makes you feel for it. The crime and class differences are stark in this film. It echoes those sentiments of the present day. The difference in wealth inequality among the wealthy and those in poverty today isn’t lost to Joker.

The film leads you down a path that shows the full mental unraveling of Arthur Fleck. It’s a character study at it’s heart. This film could very easily have been just a movie about the character of Arthur and how he goes deeper down his hole of mental instability. It didn’t need all the DC comics or Batman allusions or references to be great. That adds to the overall picture but it shines outside of that.

After seeing the trailers and previews for Joker, I was assuming that it would be following a similar path of Martin Scorsese’s masterpiece, The King of Comedy. It even has Robert De Niro in common. If you haven’t seen Michael Winner and Charles Bronson’s Death Wish, I highly recommend it. It tells the story of a pacifist in Charles Bronson becoming a vigilante in New York around the same time period as this film. Bronson’s family is murdered and broken by criminals who randomly pick his family to terrorize. Bronson learns to become violent in the face of other violence. Arthur Fleck follows a similar path to this, but this time it’s not the “good guy with a gun” story. Fleck shows no remorse for his violence in this film like Bronson does in Death Wish.

That’s the factor that separates Joker from Dirty Harry or Paul Kersey in Death Wish. Joker is a despicable character through and through. You can feel sorry or pity for him because of the situation he’s put in, but you do not sympathize for this guy at a certain point. That’s the best thing that Todd Phillips and Joaquin Phoenix could do with the character at the end of the day.

Todd Phillips is almost certainly a fan of Martin Scorsese and his work. This film follows similar trajectories to films of his. Joker tells a story that wraps itself up nicely and doesn’t overstay it’s welcome. It makes you want to keep sitting and watching. You’re hanging on every word and motion from Joaquin Phoenix the entire time.

If I had to gripe about something in the film, the other characters besides Arthur aren’t exactly developed fully. I don’t think they need to be because this is the story from Arthur’s mind. It’s all about him. Robert De Niro turns in a great performance as Murray Franklin. Brett Cullen gives a short but necessary performance as Thomas Wayne that helps drive the plot along. Zazie Beetz is the character that’s left out a bit but if you watch the film you’ll see why she eventually does and doesn’t have that big of an impact in the film.

At it’s core, if you come out of Joker thinking that it was a film glorifying the villain to hero status and making him an icon for a new revolution, you missed the point. It’s a cautionary tale about how mental illness and childhood abuse can change and shape someone into a monster. Arthur Fleck at the beginning of the film is a completely different person mentally and physically at the end. This doesn’t feel like a big budget, studio film. That’s why I think it might end up doing well at the Oscars and other award shows. Joaquin Phoenix has already proven himself to be a fantastic actor capable of putting on the performances of a lifetime. Joker is no different.

A big highlight in the film is the soundtrack. It’s not heavy handed or overly used but the licensed songs in the film fit every scene they’re in. Frank Sinatra’s “That’s Life” is a particular highlight from the film that might change the way you interpret that song.

Joker is a masterclass in how to do a subtle, punctual, and frankly, masterful film. It tells a story that breaks out of the bonds of it’s comic book inspired roots. The film grows beyond those shackles quickly and you’ll leave thinking differently than you did before. Todd Phillips shows here that he can do more than comedy films. It’s one of the finest comic book films ever made and one of the best of the year. It deserves all the praise given to it. I give it a 10/10 and hope you see it for more than just the headline grabbing crap that people are spewing about it. It’s not a film that should galvanize people to commit acts of violence against one another. Look at it more than that and you’ll be rewarded with a great cinematic experience that is deeply unsettling but fantastic.

Let us know what you think of Joker in the comments or on Facebook.

For more about Joker, DC Comics, or film, pop culture, or anything else you can think of, check back to That Hashtag Show.

All images courtesy of Warner Bros. and Paramount Pictures.

For a different view on Joker, check out the other side of the coin about how someone won’t see the film here. 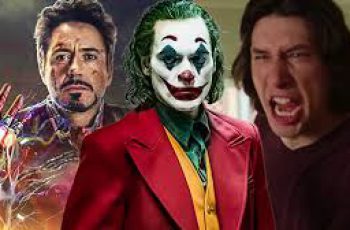