Food Brands/Companies teaming up with Video Games/Game Streams is not that uncommon to see. Xbox teaming up with Chips Ahoy for Sea Of Thieves, and Pop-Tarts and Destiny 2 are just a few examples that stand out to me. So I wasn’t really surprised last week when Critical Role and Wendy’s teamed up for a sponsored one-shot. But…. Wendy’s then posted the mysterious tweet (below) on their Twitter account. Well, now we know why. Wendy’s has released it’s own 5E Dungeons And Dragons Tabletop RPG. It is entitled “Feast Of Legends: Rise From The Deep Freeze.” And it is an interesting RPG.

What is Feast of Legends?

Game Rant is reporting that:

The adventure tasks players with rescuing the realm of Beef’s Keep. Queen Wendy rules the Kingdom of Freshtovia. She finds her kingdom facing with a dire situation. The evil Ice Jester has found a powerful artifact threatening to throw the entirety of Beef’s Keep into a new frozen age. Along the way, players will encounter all manner of villains, such as the Beef Bandit, Mucho Pan: The Extra Bun, Fry Fiends, and even Hunger.

This is one very interesting RPG has created for Wendy’s. From reading the PDF description of the game, it seems like your taking on enemies based on other Fast Food Restaurants including McDonald’s, and even Burger King.

It is interesting to see Wendy’s releasing a Tabletop RPG, mostly because this is something they have never done. Mind you, there is a level in Super Smash Brothers Ultimate with the restaurant in it, so that is a real thing.

But this is good for those who are currently running a campaign, and need a little one-shot to do with their players. Or, if your new/new-ish to 5th Edition D&D, this is a great starting point for you.

If you want to check the RPG out yourself, you can click HERE.

If you play Dungeons And Dragons and don’t use Reaper … 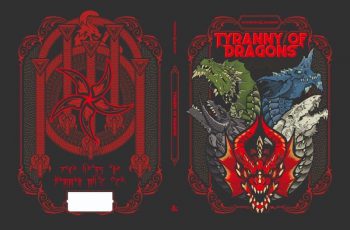 SDCC 2019 has officially come and gone. There were so …