We’re now a month away (if you count the Thursday preview) from Star Wars: The Rise of Skywalker hitting theaters. Never in the forty-year history of the franchise has there been greater anticipation, or pressure, for a Star Wars film. Rightfully so; Episode IX will conclude the story arc that began way back in 1977. While there’s been no official confirmation of the plot, we have gotten plenty of teases. The latest is a photo showing Poe Dameron piloting the Millennium Falcon …. And honestly we’re not sure how we feel about it.

Look, we understand that Poe is, as Finn describes, “one hell of a pilot.” Chewbacca is also right beside him, sitting in the co-pilot seat, granted, but…. This is the Millennium Falcon we’re talking about. It’s the ship that made the Kessel Run in twelve parsecs. It’s been beaten up, torn down, and nearly destroyed time and again, but it always comes through. There is something uniquely special about the Falcon, so forgive us if entrusting it to Poe Dameron gives us pause.

Is Poe Dameron worthy of the Falcon?

Thus far in the canon films only three people have ever piloted the Millennium Falcon: Lando Calrissian, Han Solo, and Rey. Lando and Han, of course, each owned the ship at one time or another. Rey? Han liked and trusted her (and perhaps more importantly, Chewie trusts her), so that’s good enough for me. The fact she’s a highly intuitive pilot with the help of the Force doesn’t hurt, either. She also understood and respected the ship’s lore. Now a recent EW photo shows Poe in the pilot’s seat. What does Poe Dameron know of the Falcon and its importance, whether to the Rebellion, to Leia?

We already know from previously released images that Lando will once again pilot the ship he lost to Han Solo in a game of Sabacc. Frankly if Lando flies off in the Falcon to end The Rise of Skywalker, I’m perfectly fine with that. But I can’t shake the notion that Poe Dameron at the helm of the fabled ship means something bad is in store for the Corellian freighter.

I don’t know…. I’ve got a bad feeling about this.

How do you feel about Poe Dameron piloting the Falcon? Let us know in the comments below. 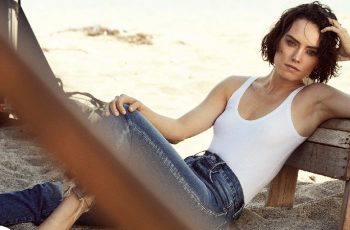 Two weeks and two days. That’s all that separates us …
Solo: A Star Wars Story’s trailer showed us Chewbacca was …