This is it, folks. We’re now in the one-month countdown to Star Wars: The Rise of Skywalker. As if fan expectation and excitement wasn’t high enough already, the folks over at Entertainment Weekly ratcheted those emotions up tenfold. We now have stunning new images from the film, together with some detailed insight into the final episode of the Skywalker saga.

One huge detail that might surprise fans is the fact the film appears far from complete. “So much is still being worked on,” director J.J. Abrams admitted. “It’s literally a practical race to get it finished.” Notwithstanding, he remains confident in its progress. In fact, when comparing The Rise of Skywalker to The Force Awakens, he feels far more comfortable at this stage of the production:

We had more reshoots on Episode VII than this one … had more story adjustments on VII than this one. We didn’t know if these characters would work, if the actors would be able to carry a Star Wars movie. There were a lot of things we didn’t know. On this, we knew who and what worked, and everyone is doing the best work I’ve ever seen anyone do. But the ambition of this movie is far greater than Force Awakens. What we set out to do was far more challenging. Everything is exponentially larger on [the Rise of Skywalker].”

The Rise of Skywalker to be biggest Star Wars film ever

Abrams himself admits that, when it comes to The Rise of Skywalker, “… the stakes are all or nothing with this film.” That includes completing story arcs for the main characters, and bringing them together. “We’re not just a ragtag group of people who have been thrown together. We’ve actually had time to train. There are some really great sequences with the three of us in infiltrating spaces,” Oscar Isaac (Poe) said of his character, Finn, and Rey.  John Boyega (Finn) added that the film “really captures the spirit of the original trilogy.”

It seems Abrams really has pulled out all the stops to bring the nine episode trilogy of trilogies to an emotionally satisfactory close. From bringing back Palpatine and Lando Calrissian, to (hopefully) addressing Rey’s true parentage, there doesn’t seem to be any aspect of Star Wars Abrams isn’t touching with The Rise of Skywalker. “They go down deep into ancient Star Wars and came up with something refreshingly new,” said Anthony Daniels (C-3PO) of Abrams and writer Chris Terrio.

We’ll find out one month from today when Star Wars: The Rise of Skywalker hits theaters. 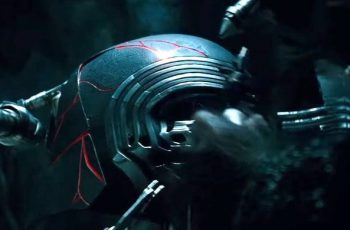 We know Kylo Ren will feature heavily in Star Wars: …

This is it, Star Wars Fans, the day we’ve all …