Variety Magazine writer Michael Schneider posed an interesting question: Can the Baby Yoda, or artificial characters in general, compete for awards? The initial answer is no, since both the Golden Globes and the Screen Actor’s Guild have said there isn’t an award for non-human characters in film. A better answer would be: Why not?

Perhaps the best example of this obvious snub is Chewbacca and the end scene of A New Hope. Though Chewie would receive his award later on, it shot this topic to the forefront, and still fuels the debate today. Should non-human characters be recognized in the awards industry?

Baby Yoda is new on the scene, however, non-human characters have been around for a long time. Let’s start with an easy one: Robot from the original Lost in Space. There are very few Sci-Fi fans that don’t know the phrase “Danger, Will Robinson!”. It is incredibly iconic. Or that Kermit the Frog, Bugs Bunny, Mickey Mouse, and Big Bird have stars on the Hollywood Walk-of-Fame. Or how about Alf? Sesame Street? Electric Company? H.R. Pufnstuf? Dobby the house elf? The list goes on forever. All of these non-human characters have made indelible marks on society and continue to be quoted and used in advertising schemes. More importantly, they sell tickets and attract viewers. Why not recognize their contributions?

Baby Yoda – Leaving his mark on us

Baby Yoda, or the current official name, “The Child”, has taken the world by storm. While he hasn’t been around long enough yet to “pay his dues” in the screen awards culture, it’s hard to argue the impact he’s having across the globe. Crocheted versions of Baby Yoda is selling like hotcakes on Etsy. People are getting tattoos of him. Memes and .GIFs are infinite. There’s also rumors that he may show up in The Rise of Skywalker, or at least have an impact on the final part of the Skywalker saga. Why shouldn’t that be awarded?

Another amazing series of non-human actors is being ignored as well. Netflix’s The Dark Crystal puppet work is incredible, giving life to a story that no human actor could portray. Another one that comes to mind is Aki Ross from Final Fantasy: The Spirits Within. Not only was she one of the first fully AI actresses, she was also featured in Maxim’s Hot 100 in 2001. Ming-Na Wen provided the voice, but everything else about her was completely digital. Final Fantasy: The Spirits Within was a ground-breaking film before it’s time. While Baby Yoda probably won’t make a “Sexiest-of” list, he could certainly be considered for Parent Magazine’s Child Cover Model competition, and likely win it.

At the least, award the humans that created Baby Yoda

Andy Serkis broke a barrier in the awards industry when he took home the “Best Digital Acting Performance” award for his portrayal of Gollum in The Lord of the Rings. That could pave the way for future digital performances that may not have a real person behind the helm. Consider advances in artificial intelligence and the impact that will have on the entertainment community. Think that’s crazy? We’re already seeing it.

Consider the portrayal of Grand Moff Tarkin in Rogue One by Peter Cushing, or young Princess Leia in the same film. Both actors are no longer with us, but the digital technology that brought them back to life is nothing short of astounding. This isn’t green screen capture, either. We’re talking full digital re-creation. The human talent behind that is most deserving of awards. Sadly, Serkis’ award is the only one given for that award category. He beat out Yoda from Attack of the Clones and Dobby from Harry Potter. The digital acting category has not been awarded since. That’s a shame.

Obviously for every example we have here there was a human behind it at some point. Faster than we can imagine, however, a full AI-driven character will make their debut. Some will joke that this is how the war against the machines starts. If that’s true, let’s start awarding them now and build some good will before they take over completely.

Stay tuned to That Hashtag Show to find out when you should start fearing your toaster and coffee maker. 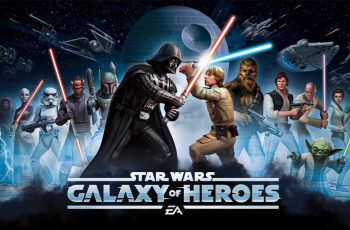 For four and a half years, Star Wars fans have …
If San Diego comic con’s considered the major movie studio …