As a Star Wars fan there are vacation destinations that are most likely on your bucket list. The new Galaxy’s Edge in either Disneyland or Disney World is one. Maybe the Lars Homestead on Tatooine (aka Chott el Djerid, Tunisia) is another. Even the Scum & Villainy Cantina in Los Angeles is worth a trip for the hardcore fan. However, now the flight itself can be your bucket list item with a Star Wars plane!

Late last year the Star Wars: The Rise of Skywalker cast and filmmakers helped to launch United Airlines’ Star Wars-themed Boeing 737-800 aircraft. It was created to celebrate the upcoming film which, of course, marked the conclusion of the Skywalker saga.

This Is The Star Wars Plane You’re Looking For!

The outside of United aircraft is navy-blue and is emblazoned with Star Wars images. From nose to tail are images of TIE fighters and X-wing fighters. Even the tail fin has glowing lightsabers on either side of it.

United didn’t stop with just the outside though. They worked with Lucasfilm on the interior as well. Inside the plane, passengers will be see custom headrests embossed with emblems of the film’s dueling factions: The Resistance (or Rebellion, if you’re old-school) and the First Order. Passengers will also board to John Williams’ classic “Star Wars” theme. And if all that wasn’t enough to have you already booking your flight, if you get tired on that long flight you can purchase the amenity kit which is stamped with the “Star Wars” insignia.

Now that The Rise of Skywalker is out, this special-edition Star Wars aircraft will only operate for a limited time. So…. Make sure you plan your trip soon. Star Wars fans can track the plane with its tail number (N36272) on FlightAware, where it will display as a special Star Wars icon.

Star Wars: The Rise of Skywalker is currently in theaters.

J.J. Abrams hasn’t exactly been shy about finding roles in … 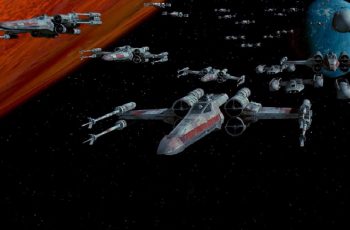 After lots of news about turmoil amongst the LucasFilm faithful, …