All hail the king. Just over a year after Permanent Waves, our tireless trio drops the atomic eighth studio album of their career. Moving Pictures is Rush at their summit. Everything about this album fires on all cylinders. From music to arrangement, from lyrics to song titles, this is penultimate Rush. This album laid down the gauntlet that said “there is no other band like us, and no matter how commercial we had to make this record, you’ll never hear another masterpiece like it.“

Moving Pictures would be a global blockbuster, going from Gold to Platinum in two short weeks. The album hit number one in Canada, number three in the U.S. and U.K., and finally slowed down when achieving 4x-Platinum in 1995, a mere 14-years after release.

The ultimate Rush song. Every part of this song rocks. If there are Rock and Roll Gods, this is their theme song. It also happens to be my favorite Rush song. Tom Sawyer would become their largest commercial hit, and, what I think, is the grandfather song of digital rock. It celebrates those who dare to be free-thinking and willing to break normal barriers. You don’t realize you need to hear this song until you hear it for what it is—the anthem of the 1980’s geeks. Oh, by the way, the melody was conceived during a synthesizer soundcheck!

Tom Sawyer would appear on ever Rush Greatest Hits album after it was recorded and was a fan-favorite house-rocker on every live tour thereafter. I had the privilege of seeing Rush live at the Ford Amphitheater in Tampa, Florida in July 2004 during the R30 Tour. Their second set kicked off with this song and it was the most electric moment of my concert-going career. You haven’t lived until you’ve seen a crowd of Rush fans rock out to this song. When I walk into heaven, that’s what I want to see.

There is no shortage of car songs out there, from the early days of the automobile to today’s pop line-up. Not many, however, capture the imagination of a young driver like this ode to a classic Ferrari, the Red Barchetta. This track is encapsulates motoring music. It should have been the theme for the British car show Top Gear instead of the Allman Brothers’ Jessica in my humble opinion.

I especially love Lifeson’s guitar mimicking the engine roar. Frickin’ awesome, as is the rest of this song about the dream of every young driver. I will admit, I didn’t appreciate it as much until I heard it live on the R30 tour. For the album, this track was recorded in just one take. To see it live, well, there’s nothing quite like the experience.

Arguably one of Rush’s best instrumental offerings in the discography. YYZ is the place where these three musical Rembrandt’s showcase their talents live on stage. Most of Peart’s drum solos come during this four-and-a-half minute rocker at a show (check out YYZ on the live album Exit…Stage Left to hear it).

YYZ is the call sign for Toronto Pearson Int’l Airport and is played out in Morse Code during the beginning riff (talk about getting downright nerdy!) This track would be absorbed into the opening overture for other live performances, like on the R30 Tour, and is full of awesome licks and Tron-like synth for you to air-drum along.

If there was ever a pristine example of Rush’s musicianship and devotion to their craft, it would be Limelight. Neil wrote this to express his struggles in dealing with live performances and stardom, and the band executed his feelings right into the music. If rock and roll has emotions, this track, and the meaning behind it, tugs at its every heart string.

I would be remiss if I didn’t share this brief clip of Lawrence Gowan from another brilliant band, Styx, paying tribute to Neil Peart at a live performance shortly after Neil passed away. I’m not afraid to tell you, every time I watch this clip, I tear up. The piano and soft delivery of this hard-hitting song gets me right in the feels. It’s particularly moving when you hear and see the crowd pick up on what he’s playing. Only a once-in-a-lifetime talent can evoke that much emotion in so many people.

Side note: So I don’t know about you, but I was disappointed to learn the lyric goes “Living in the fish-eye lens” instead of “the fish islands“. I assumed one of them must live someplace in Canada called The Fish Islands. Oh well.

This would be the last song over 10-minutes Rush would cut on an album. The Camera Eye plays out in two movements in an effort to musically capture the spirit of two great cities: New York in part one, and London in part two. It’s a tight, early-80’s rock track that Rush rarely played live after the Signals Tour in 1983. It did make a reappearance in 2011’s Time Machine tour. If anyone knows why, feel free to shout it out in the comments.

This song is the Star Wars entry of Rush’s song catalog. As a stand-alone song, it’s a little weird. But it’s part three, released out of order. Ok, try to follow this: This is part three (released in 1980) of a four-part movement called Fear. The other parts are The Weapon from Signals (1982), The Enemy Within from Grace Under Pressure (1984), and Freeze from Vapor Trails (2002). I copied them on my iPod in this order and it sounds great.

Now go out and find the four songs and listen to them in sequence. It makes a hell of a lot more sense that way, and it’s pretty darn good melodic blend of tunes. If they would have released these all together, it would have been a top-notch entry on their multi-part prog rock epics. But hey, releasing movies out of order worked for George Lucas. Why not songs for Rush?

If electric Reggae is a thing, then here it is on Vital Signs. I like the beat and the lyrics are good, but together I had to try hard to get the feel of this song, mostly because if you go trough each track on Moving Pictures, this one is the misfit. Most people give that title to Witch Hunt, but I think that’s because it is not complete (it really needs the other three parts). Vital Signs would still get plenty of commercial acclaim

I give Moving Pictures and 11 out of 10. I can’t find hardly a flaw on it. Not all the songs were big commercial hits, and that’s alright. It’s still a musical masterpiece that I’d put up against any other album as the best ever recorded (A bold claim, but I stand by it!) If there were low marks, I’d give it to Vital Signs. Not because I didn’t like it, but because it’s the square peg in the round hole here.

Being a Star Wars fan as well, I think Witch Hunt is the dark horse here. In the end though, it doesn’t matter. Tracks one to four blasted this album to quadruple Platinum no matter what else was recorded with it. This album is the finest Rush ever produced, and it deserves every accolade it has received.

Hey Rush fans! Check back next week as we go deeper into the 80’s discography with 1982’s Signals and 1984’s Grace Under Pressure. Check out Rush’s official webpage here, and stick with That Hashtag Show for all your geek pop culture news and reviews. If you’re digging the Rush Review so far, let us know in the comments. We’d love to hear from you! 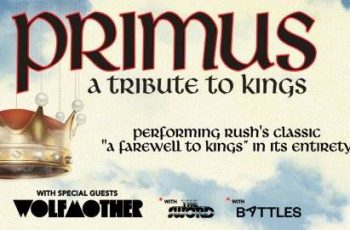 The passing of Neil Peart has begun a resurgence of …