Yes we talked about The Child aka Baby Yoda

Here is what Dominic Pace had to say about The Child:

“Dave Filoni and Jon Favreau were just amazing. But what was also amazing was how we didn’t know about The Child. A funny story about Baby Yoda is when we first saw it we just thought he was holding a baby. We thought it could be a Rey, Finn, or Poe when they got found backstory. So unless you were on the A-list you didn’t know. So, I thought that was amazing with over 200 people on the set with the cast and crew, that Filoni and Favreau were able to keep it under wraps. Then we were all surprised when we saw this 5-million dollar Baby Yoda that makes our hearts melt.”

What is next for Dominic Pace and Gekko?

So, we might get to see more of the bounty hunter Gekko in the near future. While he can not comment on anything about season 2 of The Mandalorian here is what Pace had to say:

“Ethan Sacks who is writing the new Marvel’s Star Wars Bounty Hunter comic books is waiting for approval to include Gekko in the series. And again it would be a dream come true if it happens.”

As for Dominic Pace he is loading up his convention schedule. He will be traveling all over the US over the year including stops at The Rhode Island Comic Con and Star Wars Celebration.

“As a thank you I will be signing a complimentary poster at Star Wars Celebration Anaheim at the Mandalorian Mercs booth. I am grateful to all of my fans. Star Wars is one of the only places where you can get less then a minute of screen time and still have a fan following.”

Dominic Pace and Nerd Alert Events are excited to announce a raffle to benefit one of their favorite charities, Make-A-Wish America. All of the items are hand picked by Dominic and some will also be autographed by him. 100% of the profits from the raffle we be sent to Make-A-Wish. You can find all the details of this raffle by clicking here.

I want to say thank you Dominic Pace for taking time out of your schedule and taking Star Wars and The Mandalorian with me. Also make sure to check out Gekkothebountyhunter.com for updates and Gekko merchandise. You can also follow him on Facebook at Lair of the Gekko.

Jon Favreau has given us Star Wars fans something to talk … 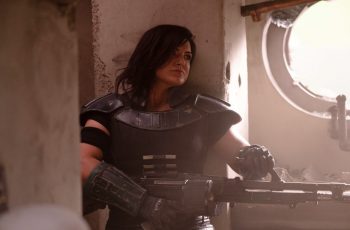 Gina Carano is under fire for her refusal to put …