During the second half of the big game this past SUnday Marvel released an ad of some of their upcoming titles for Disney+. During the ad we saw clips from Falcon and the Winter Solider, WandaVision, and finally, The Master of Mischief himself, Loki.

The commercial gave us all sorts of goodies to dwell on while we wait for official trailers. What know one saw coming was a first look a Tom Hiddleston’s Loki. Loki is returning for his own series sometime in 2021. The trailer ends with the first glimps of Hiddleston saying, “I’m going to burn this place to the ground,” in true Loki fashion. What better way to end a huge trailer airing during the biggest game of the year than on arguably one of, if not the most popular, MCU characters.

The series will pick up with the version of Loki who escapes from the Avengers in an alternate timeline. That timeline takes place in Avengers: Endgame. Tom Hiddleston confirmed that during the Comic Con panel last year while announcing the series. What’s interesting, for comic book fans, is not the what of the clip, but the where. He appears to be in prison, and keen-eyed fans might recognize the log on his shirt… Will we see the Time Police in the series?

The new trailer comes off of the news of Owen Wilson being cast in Loki. Wilson’s role in the series has yet to be determined. This series is shaping up to be a star studded hit. The series is planned to be released in 2021.

Loki Is Here To Stay

This new series is sure to be a hit with fans. Hiddleston’s portrayal of the God of Mischief has been nothing but a success. This time around is sure to be no different. I will take any new Loki I can get whether it be another go on the big screen or as a regular series on Disney+. We live in an era where the voices of fans go a long way. Fans have affected scripts and even release dates of some films. If the same goes for Marvel then we may be seeing a lot more of Loki in the years to come. 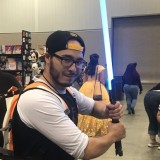