In this part, we pick up Lifeboat: A Star Wars Fan Fiction with a flashback, and follow a young Imperial Lieutenant with a message from The Emperor for the Dark Lord of the Sith himself, Darth Vader!

The shuttle’s rear ramp lowered, sending a blast of intense heat up into the cargo hold. Lieutenant Varon Seeda had never visited a molten planet before. The powerful odor of burning sulfur assaulted his senses, stinging his eyes and nostrils. His gray Imperial uniform felt uncomfortable, itchy and sticking to his skin.

He walked out into the heat to gain his bearing. In the distance, spires of volcanic rock jutted skyward across the landscape. Magma erupted in fountains of orange sporadically across the rocky terrain. Below the landing platform, a massive river of lava flowed from the base of the towering black spike known as Fortress Vader; the personal stronghold of the Emperor’s right hand and chief enforcer, Darth Vader.

His journey to Mustafar was shrouded in secrecy. These types of clandestine assignments were not suited for academics like him. Seeda was a research historian from the basement of the Imperial Reclamation Services, and though he was a trained Imperial Infantry officer, he was no soldier. He was too smart for that, preferring to fight using his mind rather than a blaster. Life at the Reclamation Service was usually quiet. At least it was until certain discoveries were made. Since then, his simple compulsory military career was overturned.

“Learn ancient languages, Seeda. You’re so smart,” he mocked to himself. “Bollocks. I should have gone on to Lothal with the 7th Fleet. Anywhere but here.“

The most dangerous condition he’s faced in a five-year military career was a Mynock attaching itself to the power cable in his apartment building on Coruscant. Now, he was crossing the molten surface of Mustafar seeking audience with the most terrifying soldier in the Empire.

In his left hand he carried a black reinforced-steel case attached to his wrist by cuff and locked in some way he could not discern. Instructions from his commander on Coruscant demanded Seeda to protect it with his life. Deliver the package to Lord Vader directly and no other. From that moment forward, two of the Emperor’s personal guard were assigned to him and they have not left his side since.

He debarked and advanced to the reception vestibule at the bottom of the landing pad. His pace quickened toward the door, hoping to shorten his exposure to the unbearable high temperature. Hoping Lord Vader would see the value in his intellectual services rather than a simple courier, he steeled himself and pushed the intercom button at the personnel door.

No response. He tried again with the same result. He walked backward a few feet to look over the doorway for a security monitor but saw none. “Perhaps no one is home,” he mumbled. Pulling in a deep breath of super-heated air, he bellowed out towards the seemingly empty tower.
“HELLLOOOOO?”

Nothing. No activity to be seen anywhere. His voice echoed off the empty canyon walls. The only reply was the hiss of gurgling lava below. He approached the door again, leaning closer to the intercom and pushed the button again, speaking loudly.

Suddenly, the heavy blast doors slid open, revealing the scarred armor of a Trooper captain by his rank plaque, flanked by two Magma Troopers. Seeda saluted smartly and came to attention before him.

“Lieutenant Varon Seeda of the Imperial Reclamation Service reporting under royal order of the Emperor. I carry a message for Lord Vader, and am newly assigned to his service.” He pulled a holodisk containing his orders from his tunic pocket and extended it to the captain, who did not seem at all interested in it.

Captain Junus, the garrison commander of Fortress Vader, made it his business to know all the comings and goings involving Darth Vader and those who served him. This Lieutenant Seeda was not among them. He looked down at the disk, yet did not take it. He stood for a moment, gripping his rifle tightly while sizing up the scrawny officer. Finally, his eyes came to rest on the secure message case.

“Neither I nor Lord Vader received notice of your impending arrival, or any such orders,” came the electronic voice from behind Junus’s helmet.

“My lord is not accepting visitors at the moment. However, I will deliver your message. You may wait here at his pleasure.” Junus extended his hand to take the case, not the holodisk. Seeda recoiled.

“I beg your pardon sir, but my orders are to deliver the message only to Lord Vader personally,” he said, slipping the case back behind him. Sweat began running down his brow and his hands began to shake. “I am ordered to protect it with my life, placing it in his hands only. With respect, I must see him immediately.”

The Magma Troopers both brought their DLT-19 heavy rifles to bear. Captain Junus withdrew his hand, folding his arms behind his back. His face was hidden, but no doubt his expression changed from irritation to anger.

“I’ve no time for games, Lieutenant. You arrive unannounced, claim to be sent by the Emperor himself, and carry a shielded case which you will not surrender for inspection. Do you have any idea how many assassination attempts there have been on Lord Vader while I have served him?”

“Eighty-seven times, enemies of the Empire have sent their worst. Capital ships, X-Wing fighters, thermal detonators, assassins, saboteurs, bounty hunters, spies, droids and one particularly nasty Rathtar hidden inside a Bantha carcass. Eighty-seven times we have thwarted them all.” The tone of his voice increased angrily with each item he listed. “Just because you drop out of hyperspace aboard an Imperial shuttle does not make you any less of a threat. How am I assured you are not here for attempt number eighty-eight? Why would Lord Vader, the right hand of the Emperor himself, not be notified about a messenger of such importance?

By what authority would you ever think I would allow you access without passing through proper security protocol?” The Troopers took an aggressive step forward. That was a mistake.

[Did You Miss Lifeboat: Parts I and II? Click here and get caught up!]

Behind him, the nose ramp lowered again. Down marched two crimson-clad Royal Guards in quick lockstep, brandishing their signature force-pikes. They swiftly crossed the landing pad and took position on either side of the lieutenant, menacingly dropping their pikes into attack position. The Magma Troopers and Junus took a slight step backward. Seeda, taking this opportunity to feel more important than he had ever been, bowed up to his full height and pushed his chest out.

“These are Captains Vario and Krest of the Emperor’s Royal Guard. I suppose my authority derives through them. Now Captain, if you please, or if you don’t please, I care not either way. Take me to see Lord Vader. Now.”

Go to page 2 and find out what happens in Lifeboat next!

Well STAR WARS fans it is that time of the … 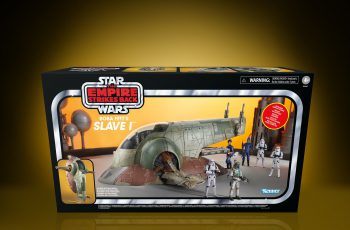 Earlier this week we reported on some possible Hasbro Toy …