Both Presto and Roll the Bones are very special Rush albums to me. Even though they cross decades, I’m reviewing them together. They both came out while I was in high school. Being the geek that I was (and still claim to be), these two cuts were comforting friends that helped me get through the roughest three years of any teenager’s life; 10th through 12th grade. These lyrics, especially on Presto, spoke to my heart. I went through two soul-crushing break-ups in high school. The first one was eased with the music of this album.

Critically, Presto would reach #16 on the Billboard charts and hit Gold status about a year after release. I know fans of many bands have “their” album. You know the one I mean. That album that happened to release at a vulnerable or triumphant time for you, and it was as if your entire being was laid bare to the world through the music. I’m sure my review of Power Windows and Hold Your Fire felt unfair to some fans for the same reason. Regardless of what any critic thinks, some tracks simply belong to a fan’s heart. Presto and Roll the Bones fill that bill for me.

Did you miss the last review of Power Windows and Hold Your Fire? Read it here.

Musically, this album showed a significant shift in Rush’s sound. The leading edge of the grunge-rock movement was upon the world in 1989 and listeners were looking for a harder, dirtier sound. Rush began the slow return to those base rock-and-roll roots here, on their first album under a new record label (Atlantic Records). They kept a clean 80’s sound but processed less and rocked more. Let’s dig into the music and see what makes these tracks so special.

A new sound and new look hits on their opening rocker, Show Don’t Tell. Rush has never struggled with album openers, and this track continues the tradition. If ever there was a rock song that paid homage to courtroom proceedings, this is it.

It has a catchy riff with a tossed-around time signature. It almost defies logic you could stutter guitar, drums and bass into such a great melody. I especially like the jangly acoustic slashing going on behind the scenes. This song is advanced for the late 80’s era of ho-hum rock, and it’s glorious!

Chain Lightning is another flash of Rush brilliance. It starts like a typical 80’s synth song but breaks into a chugging rocker that’s hard to turn off. It also has the nerdy lyrics I like with a mean bass and guitar solo at 2:25.

The lyrics focus on a weather phenomenon called Sun Dogs, which can be seen anywhere in the world during any season as a halo lens flare around the sun. This are some deep, nerdy meteorology and I love it. Thank you Neil for making weather rock!

The Pass is lauded as the centerpiece of this album, and lyrically, it is. Teen suicide is still a real problem we face and this song tries it’s best to tackle the tragic feelings that lead someone to take their own life. Having experienced the loss that comes with a suicide, this song pulls back the canvas on some scarred memories. A scroll through some of the YouTube comments on the Rush: Official link tells the stories of what songs can mean to people, especially when they find themselves on the edge of a life-changing, or ending, decision. Seeing this song live was a treat.

No album is without its stinkers, and Presto has a couple. The beat here is tight and well-made, but I couldn’t get into the lyrics of War Paint, which is strange. The reason I love this album is because of a break-up. This song is about the facades in relationships. It should be THE break-up song on Presto I should love, but it’s not my favorite. It still rocks though.

That opening bass and beat… it’s catchy! Your foot will definitely tap, and you might even start to bob your head. When it bursts open, Peart is going bananas on the drums back there. He mixes electric and acoustic drums into a tribal rhythm inspired by a trip to Cameroon and it’s dang good. Lee has some fun here with the vocal effects, too.

“Each emotional injury / leaves behind its mark / sometimes they come tumbling out / like shadows in the dark.”

Scars is an upbeat, fun song that shows a beat-heavy side of Rush we don’t get to see too often. We’ll see it again on a later review of their Counterparts album.

I repeated this song so much I can recite it word for word at any moment. Presto isn’t Rush’s hardest hitting track, but the lyrics here are breathtaking. Even without that deep prose, this song rocks. If I had a complaint, I wish they would have driven the guitar solo a little harder and longer. Alex Lifeson lays down some sick string work, but it gets cut a little too short here. Other than that, box it and ship it. I love this song.

“I had a dream of the open water / I was swimming away out to sea / so deep I could never touch bottom / what a fool I used to be.”

In the acoustics of my shower, I slay this song—sometimes to the detriment of my wife’s peace and quiet. But hey, when you’re made from the dust of the stars and the oceans flow in your veins, sometimes you just have to belt it out.

Alright, so this isn’t Rush’s finest lyrical moment of the album. The words here are alright, but this track as an instrumental would rock. I wish they would have left it that way.

Best I can tell, the song is about show business, and a man and woman who are addicted to stardom. I think the man is a manager of sorts, and the woman a performer. I don’t know… the beat is slick, but the lyrical execution is a little clunky. Still not terrible. Superconductor also rocks.

So Neil is just showing off here. Anagrams adorn almost every line of Anagram (for Mongo), such as “take Heart from Earth and Weather”. The tune also has a gentle-rocking sonic vibe to it, making Anagram a fun blend of processed Rush and rocking Rush. Bonus points for the clear nod to Blazing Saddles: “Candygram for Mongo!”

Rush again delves into the environmental with Red Tide. Critics relegate this one to Rush’s dustbin, but I like it the same way I like Synchronicity II by The Police. Here, the Red Tide replaces the something that crawls from the bottom of a dark Scottish loch.

Throughout the song, the dreaded creature inches closer, verse by verse. It’s a little dark for most of Rush’s armory, but the lyrics drive home the point of limited time and the things that can take it from you. Let us not go gently into the endless winter night, indeed.

Ugh. Hand Over Fist is an anthem for rock-paper-scissors and is sadly a forgettable tune. The bright spot is this one stanza:

I can relate to that rock, but struggle relating to this song. I’ll just take it for what it is and move on.

Our trio from Toronto didn’t do many ballad-type tunes, but it’s hard to categorize Available Light any other way. I put this in the Presto stinker category, too. It feels like a filler track. I like the lyrics, but I don’t like the arrangement. When it rolls through my playlist though, I’ll still let it play. It rocks enough. Extra credit noted for Lee’s stratospheric falsetto vocals here.

I give Presto a 8 out of 10. I know, I know… but hear me out. Critics weren’t kind to this album, but this LP means a lot to me, personally. Especially the song Presto. This isn’t a hard rocker. Some fans may call it soft. While I can agree that some of the music is off for Rush, I call this entire effort lyrical genius. Neil Peart’s wordplay on this album is so deep you can’t really reach the bottom. He tells such great stories and evokes so much powerful emotion with his words if you take the time to hear and read them. This album also does not have an overarching theme like previous cuts did.

“There is no manifesto, although there are many threads and a strong motif of looking at life today and trying to act inside it.”

Another thing that stands out on this album is the clear definition of each instrument. The way this album was produced is brilliant. The blends are a wonderful harmony together, but you can still pick out the licks from each instrument clearly. This is likely the result of new producer Rupert Hine’s influence. Presto is their first album together.

All that said, the next album sees a bigger break from the synth-heavy 80’s era Rush, and it speaks to my soul, too. Click over to the next page for Roll the Bones… 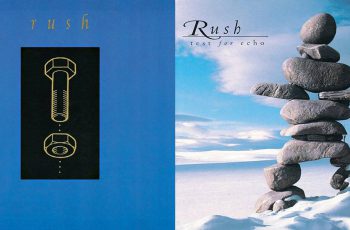 The Rush Review covers Rush in the 90's with Counterparts …