A brilliant college student is sent on a mission to prevent an impending disaster by making small “adjustments” in this week’s Comic Rewind, Strange Attractors.

Heller Wilson was a mathematics student who was working on his thesis paper on complexity theory, but he was having trouble. To be specific, he wanted to know why New York is always able to bounce back from disasters, but other cities struggle.  Wilson sought out a disgraced professor named Dr. Spencer Brownfield. Brownfield wrote about complexity theory back in the ‘70s and Wilson was hoping to pick his brain.

Brownfield told Wilson it is no coincidence and that Brownfield prevented disasters and helped the city recover. However, Wilson didn’t believe it was possible.  Brownfield used complex math to see the patterns in life. He used these patters to make small “adjustments.” These “adjustments” were things like making sure someone was late to work because in a few months time they were at the right place to stop a robbery. It was all butterfly effect kind of stuff.

However, Brownfield could determine something big was coming closer.  He was trying to stop it, but he was old and only one person. Could Brownfield and Wilson work together to stop the big event before it was too late?

Strange Attractors was written by Charles Soule with art by Soo Lee and Greg Scott.  BOOM! Studios published the volume in 2017.

I was really looking forward to this science fiction story, but with the butterfly effect woven in. However, this was the most boring comic I’ve read in awhile.

The stakes are high, but they don’t seem that high. A big reason is that there is zero excitement or adventure to the comic. At one point Wilson says he doesn’t want to do these “adjustments” anymore, but then keeps doing them. It was like right away from “no never again” to “ok I will”. Where is the suspense or Wilson deeply reflecting on what he’s learned and what it means for the future?  It isn’t in this book.

Do I Have To Be A Mathematician To Find Strange Attractors Interesting?

I found this book to be boring. It relied far too much on knowing intricacies of math. I’ve never heard of complexity theory, and I don’t know what it looks like or know what it’s for. They show pictures of it and it’s just a bunch of lines on a page. Am I supposed to be impressed, intimidated, or bored? I chose bored.

Everything in the comic worked out too easily and there was no real conflict. Wilson and Brownfield have a disagreement. It wasn’t even a fight and that is supposed to be the big conflict?  The terrorist attack that Wilson and Brownfield are trying to stop; Wilson stops by accident. It wasn’t a race against time or they barely made it in time. Wilson happened to be at the right place and threw a backpack at a terrorist.

The entire comic I was waiting for the story to pick up and for it to get interesting.  It never did and this comic was a complete waste of my time. 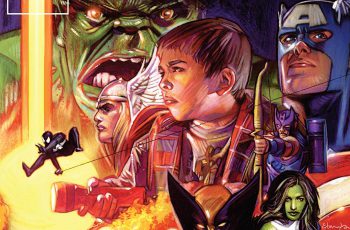