The Millennium Falcon is one of the most storied spacecraft in all of science fiction…. And for good reason. The “fastest hunk of junk in the galaxy” is “a survivor,” as Poe says in Star Wars: The Rise of Skywalker. From Lando Calrissian, to Han Solo, to Rey, the Star Wars ship has taken its pilots to hell and back and hell again more times than we can count. As incredible a vessel as it is though, it’s also a stark reminder of sorrow and pain, especially for Chewbacca. Today we discuss a haunted Millennium Falcon.

Haunted can mean many things, granted. Typically, one associates the term with some sort of spectral presence. That could be the case now as Rey takes command of the Falcon, and the ghosts of the Force are finally with her. But right now we’re talking about a haunted Millennium Falcon in terms of the painful memories it carries across the galaxy.  At over two hundred and fifty years old, Chewbacca parting from Han Solo was inevitable. That doesn’t lessen the pain Chewie must feel every time he steps aboard the ship that was home to so many of their adventures.

The Rise of Skywalker saw the Falcon reunited with its original owner, Lando Calrissian. The film’s novelization goes even deeper, and demonstrates the pain even Lando feels stepping aboard the Corellian freighter once more. The ship was once his, lost when Han discovers Lando’s cheating ways and wins the Falcon in a legitimate game of sabacc. From that point forward it’s a haunted Millennium Falcon for Lando, but we learn just how much in the new book.

Lando mournfully wanders the Falcon before heading off to recruit help for the Resistance with Chewbacca. What was once his is now changed. His beloved cape closet now serves as Chewie’s first mate quarters. Through Lando’s painful retrospective, however, we learn just how much of a haunted Millennium Falcon the ship is for Chewie. Lando can’t help himself but to engage a holodisk he finds there, you see….

The recording is of Chewbacca, holding an infant boy, laughing and tugging at the wookiee’s long fur. Even Lando can’t watch for long; the memory of Chewbacca cradling young Ben Solo is too much for even him to bear. Imagine the pain Chewbacca must feel from such a joyous moment knowing that same child murdered his best friend. As strong as the mighty wookiee is, everything about the haunted Millennium Falcon serves as reminder of how much he’s lost.

We don’t know if Chewie accompanied Rey to Tatooine at the end of The Rise of Skywalker. Nor do we know Chewbacca’s fate. We can only hope that, now that the galactic conflict finally seems to be over, Chewbacca may finally find some peace.

The Devronian in the Details The one thing the Star … 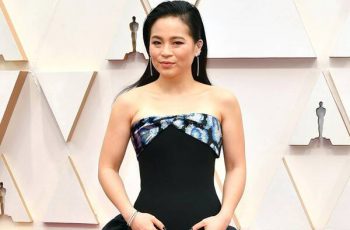 Kelly Marie Tran has had a bumpy road throughout her …