The trailer for season 2 of Doom Patrol is here. Ahead of its debut on HBOMax on June 25th.

When DC’s streaming service launched in 2018 it offered numerous exclusive original shows as a way to entice subscribers. It also gave creators a chance to develop DC content outside of the films and the CW shows. Doom Patrol was one of these. Following the adventures of a ragtag group of superpower individuals and the man who gave them their powers. A wheelchair bound super genius known simply as The Chief. The show drew from Grant Morrison’s run on the team and fully used the looser streaming platform guidelines to take advantage of Morrison’s weirdness and more mature content.

Doom Patrol drew a lot of critical praise and subscriber numbers, even if it was hampered by being on a somewhat limited streaming service. So it came as little surprise when a second season was announced. Part of the announcement was that Warner would have the second season of Doom Patrol debut on HBOMax instead of exclusively to DC Universe. As some of the exclusive content for the new platform. From the new trailer the principal characters will be returning for the new season. The Chief (Timothy Dalton), Robotman (Brendan Fraser), Negative Man (Matt Bomer), Elasti-Girl (April Bowlby), Crazy Jane (Diane Guerrero), and Cyborg (Joivan Wade). Joining the cast, as revealed in the trailer, will be Abigail Shapiro as the chief’s secret daughter Dorothy.

Takeaways From The Trailer

In addition to confirming the cast for Doom Patrol season 2 the trailer also hints at some of the storylines we can expect from the new season. We see clips of the Chief’s daughter and her mysterious powers. The patrol greatly reduced in size running around the mansion. Some sort of party. Cyborg in therapy talking about post traumatic stress disorder. Rita (Elasti-Girl) trying to better master her powers. And others bits and pieces. As previously stated the first season was well received but had limited viewship because it was on a more exclusive streaming platform. Hopefully the second season being on HBOMax will solve that problem. While continuing to deliver on the kind of character rich storytelling that made the first season so well received.

It was a dark time for the comic world. Sales … 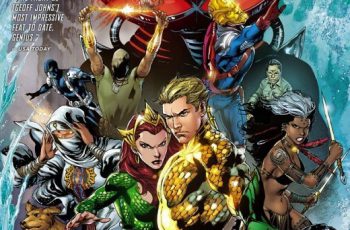 In week five of the Aquaman hype train I …