Since the announcement of the Snyder Cut of Justice League, there has been a growing call for studios to release directors cuts of other well-known movies. Examples include Paul Feig’s Ghostbusters and David Ayer’s Suicide Squad. Both of which are considered polarizing among fans.

Batman Forever is one of the more interesting movies when it comes to the topic of directors’ cuts. Darker elements of Batman Forever were cut due to pressure on the studio. Tim Burton’s Batman Returns was a much darker film than expected. Warner Bros wanted a different film than that one.

The longer cut definitely exists. Apparently the uncut version clocks in at roughly 170 minutes. Nearly 40 minutes longer than the 129-minute theatrical cut. However, Warner Bros is unsure about releasing it. Citing they are

Unsure if there’s any hunger for what was described to me as a ‘much darker, more serious’ version of the film.

Since it’s release pieces of the cut material have since made their way online. Giving us insight to what the film might have looked like.
One scene is an alternate opening of Harvey Dent’s cell after he has just escaped from Arkham. The cell is covered with writing in the blood. Showing Dent’s obsession with Batman and giving a look into the villain’s psychosis.

Another cut scene involves Bruce reading from his father’s diary. Learning his parents only went to the movies at Bruce’s insistence. It’s also known that Schumacher wanted to explore the emotional and psychological issues that drove Bruce Wayne to become Batman. An idea that later served as the foundation for Christopher Nolan’s acclaimed Dark Knight Trilogy.

Given the praise of the Dark Knight Trilogy. There is every reason to believe that Schumacher’s darker version will be praised and loved by fans as the definitive version. Hopefully like with the Snyder Cut, a strong and dedicated fan campaign can get this cut released. It would be a great way to honor the recently deceased director.

The word of the issue is EXPOSITION.  One of the … 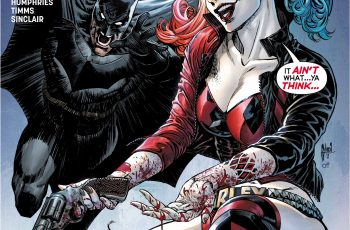 At long last we reach the trial of Harley Quinn …