Less than a month ago, Disney+ announced Premier Access. Now, the streaming add-on may have already increased its ticket price.

The service centers around Disney’s live-action Mulan. COVID-19 and widespread theater closures delayed the film’s theatrical release back in March. At the beginning of August, Disney+ announced Premier Access as a way for fans to still see the film (and to allow Disney to still make money off of it).

For an additional one-time fee of $29.99, Disney+ subscribers would gain access to stream Mulan starting September 4.

Now, with only ten days until Mulan hits the platform, it seems like Disney may have quietly raised that price.

The Premier Access announcement listed the price as $29.99. In all subsequent marketing for Mulan, the price has been listed as $29.99.

Despite previous marketing billing the Premier Access addition as $29.99, the streaming site currently lists the price as $5 more. Is this a mistake? Or will Mulan cost viewers even more than expected?

Again, Premier Access is only available to existing Disney+ subscribers. In other words, you’ll have to pay the regular $6.99/month, plus the Premier Access fee (now potentially $34.99), bringing the US audience’s viewing price to $42.

And I single out US audiences specifically, because Disney+ just announced the international prices for Premier Access. Spoiler alert: they’re cheaper.

A Lower (Or Free!) International Cost

While Disney+ has possibly raised the Premier Access price for US viewers, it’s actually lower for a ton of international territories. (And in this case, I mean lower than the originally proposed $29.99.)

France will actually get Mulan for free – but this seems to be because the film will roll out to all Disney+ subscribers at a later date.

Personally, I don’t see why anyone would pay the Premier Access price when they can just…wait.

The studio confirmed Mulan will ultimately be available for regular Disney+ subscribers at a later date. So if you’re willing to wait, you’ll get to see Mulan at no extra cost. (And frankly, we’ve already been waiting so long, what’s a little longer?)

And if you’re already willing to wait, you might as well just grab a DVD/Blu-ray/Digital copy when the time comes. That will set you back about the cost of Premier Access (or less!), and then you won’t have to maintain an active Disney+ subscription to watch Mulan whenever you want. 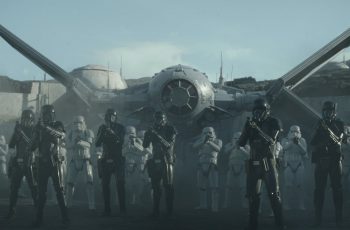 Connections, the eighth episode of Disney Gallery: The Mandalorian on …

It’s been a big week or so for news about …