FINALLY, Disney+ dropped the season two trailer for The Mandalorian. If you haven’t seen it yet go check it out here and come back. Assuming everyone watched it, let’s take a closer look at it and see how many wrong assumptions we can make. Face it, season one did a great job taking us where we least expected it to. This trailer looks fantastic, so let’s dive right in and do a Mandalorian S2 trailer breakdown!

I could watch that opening shot all day – and it’s only a planet! So why would a shot panning over one planet (or moon) to reveal another planet be so jaw dropping? Look at the shot! If we saw this up on the big screen it may still be an impressive shot, but in a big budget movie, we expect it. This is television (streaming whatever)! The caliber of that opening shot alone is absolutely incredible. Take a look at other space shows and show me a shot half that quality!

Then of course enters the Razor Crest. It makes a nice little pan as it crosses the planet/moon, but take a closer look. Its rear hatch bounces, fully open and the internal lights flicker. The shot doesn’t quite give us enough information, but it almost looks like the ship drifts across the shot. The engines are running and if there’s smoke it’s faint. The Flight path does flutter however. Either way it does not look to be in the best of shape. Times look to be tough for our Mando.

Before I go into the actual shots let’s take a look at the voice over. If this sounds like the Armorer from season one, it is. This voice over comes from last season’s finale. They chopped it up a bit, but most of it is there. It goes:

Matriarch: Show me the one who’s safety deemed all this destruction. You must reunite it with its own kind.

Matriarch: This you must determine. The songs of eons past tell of battles between Mandalore the Great and an order of sorcerers called Jedi.

Din: You expect me to search the galaxy and deliver this creature to a race of enemy sorcerers?

Matriarch: This is the way.

This dialogue drives the purpose of season two, but it also hints at canonizing something not only from legends but lost comics. If you want to know more about the Mandalorian/Jedi interactions dig up an old set of early 90’s comics called Tales of the Jedi. Ulic Qel Droma becomes the Mandalore and leader of the Mandalorians for a time during the Sith war. Let us hope this story resurfaces in canon.

As the Armorer lays out the plot for season two, we see some interesting images in the background. First we see Din and the Child walking into a city which appears to be outer rim in origin. I believe it to be the planet on which we see the fighting pits later, but its the next couple that hint at something stronger.

First we see sand dunes and a tusken on Bantha. While this could technically be anywhere, such imagery strongly suggests this to be Tatooine. The Razor Crest flies across the sky in the background. The second is a snow planet. We already know of a couple snow planets, but the next shot all but locks in its identity. In the background sits a giant piece of machinery. I cannot identify it from known ships/tech, but odds say it is Rebel tech. This planet has to be Hoth.

Why show us these two planets? Why would Din go here? Think about the timeline. This show takes place five years after Return of the Jedi. Din is told he needs to find the Jedi and return the child to them. At this moment in time there is only one known Jedi – Luke Skywalker! Din must be trying to track Luke down. I seriously doubt he finds Luke as that would set into motion a chain events that would seriously disrupt what we know. Most likely his journey crosses path with lost Jedi – perhaps of Togruta origin?

Okay maybe we don’t have Jedi pirates, but what we do have is Din and the child on a watery planet. The ship at sea and the harbor feature enough you can bet this will be the focus of a couple episodes. While the new look is amazing, the cloaked figure in the distance really raises questions. There one minute and gone the next. Okay, so any rogue can do this, but notice the look that passes between Din and the child. It really seems like the child feels something. This could be a lost Jedi.

Maybe it’s a physically altered Bariss Offee seeking redemption for that terrible story arc from Clone Wars that ruined her good name! Okay not likely, but a Bariss fan can hope.

Also did you take a closer look at the cloaked woman? That was WWE superstar Sasha Banks. Whoever the cloaked figure is, you can bet she will serve a greater purpose in the story ahead.

The next shot shows us Din will cross paths with the Republic at some point as two X-Wings drop into formation along side the Razor Crest. Okay, maybe this is some standard checkpoint and everything goes swimingly. Nope. As soon as the X-Wings move along side, the starboard X-Wing immediately locks its S-foils in attack position. Either Din makes someone mad or the prison ship fiasco comes back to haunt him. The X-Wings then chase him through clouds. This might be any planet, but given the assumption Din wants to find Luke, could it be Bespin?

Then cue the rest of the action. A lot of scenes flash by with little definable meaning, but there are two shots that stick out. The first being the speeder bikes. We have seen them do some crazy things with speeder bikes, but plummeting off the side of a cliff and then catching themselves at the bottom was wicked cool. The Scouts even do a foot drag like motorcycle racers do on sharp turns.

The second stand out image comes when we see the fighting pit. Two giant, green creatures slug it out with axes. They look like….no….is it? Yup, they are Gamorreans! They only Gamorreans we have seen before now are the fat slow kind at Jabba’s palace. These two look tall and muscular, as if they walked right off the WWE rosters! The outfits match the Gamorrean look, but the different physiques make them look like a whole new species. For all we know they could actually be Roman Reigns and Braun Strowman.

What would a Mandalorian trailer be if we do not have at least one scene where the child’s cuteness doesn’t make us laugh or go awwww. Din talks with a one-eyed Abyssin. While we do not know who the character is, I’d bet there is a celebrity behind the mask. As trouble erupts, the child sees Din arm his whistling birds and immediately reaches out of his cradle and hits the close button. Easily the best part of the trailer.

I love the next “scene” where the screen stays black, but we hear the whistling birds go off and several thunks and clanks. Din takes apart the arena one gladiator at a time….or technically all at once but whose counting?

As for cameos, not a whole lot was revealed. We see Greef and Cara return as we knew they would. Moff Gideon also shows up briefly, but other than that we only see two cameos – Sasha Banks as the cloaked figure across the warf and the Abyssin who will likely be someone famous. No other cameos or new characters popped out.

How about it? What stood out to you? What has you excited for Oct 30th? 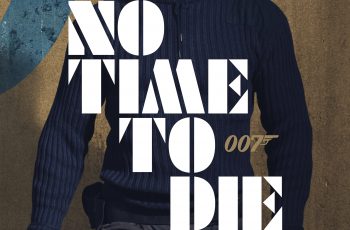 James Bond’s latest film, No Time to Die, will apparently … 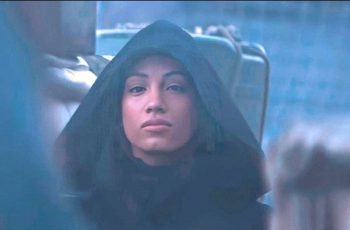 If you haven’t seen The Mandalorian season two trailer, and …