If you know one thing about me, it’s that I love horror, and I love Iron Maiden. I love them so much, that for the very first “A-Thon” on THS, I did Iron Maiden. The one-time zombie, now lord of time and space, Eddie, is their mascot. He’s made plenty of different appearances over the years. His very first appearance being the cover for the single art for “Running Free”.

Ever since that first appearance, Eddie has been all over Iron Maiden’s artwork for their albums and singles. He’s made his way all through time and space. He’s been a pharaoh, a cyborg, an organist, a virus (twice), a tree, a murderer, he’s been murdered by Margaret Thatcher, battled the Devil, a shaman, and anything else you can think of. The possibilities for the zombified teenager are endless. That’s why Iron Maiden is so long lasting and iconic. Their music is fantastic, but the icon of Eddie is the introduction that everyone gets. If you’ve never heard of Iron Maiden, you’ve still likely seen the artwork for Killers or Number of the Beast.

The art of Derek Riggs has and will live on forever in the hearts of Iron Maiden and metal fans. So today, for THS Fright-A-Thon, we’re going to take a bit of a backtrack to the heavy metal sphere. After all, horror doesn’t just occupy movies, TV, comics, books, and stories. You’ve got plenty of horror themed heavy metal out there, like King Diamond. So, let’s start off strong with number five.

If you thought that Eddie didn’t have skin in the game in WWII, you’re wrong. The song “Aces High” tells the story of the Battle of Britain in the skies above London. Spitfires and Nazi planes did battle for the airspace. The song perfectly tells that story and when you combine it with Winston Churchill’s “We Shall Fight On The Beaches” speech, you get a hell of a concert opener.

Hailing from the Powerslave album, “Aces High” is one hell of a piece of art for Eddie. You’ve got a damn good look at his face and the glowing power behind his eyes. It’s one of the most emotionally evocative pieces of art for Eddie. Normally Eddie has the upper-hand in most situations he’s involved in with Iron Maiden art. During the Battle of Britain, he has his work cut out for him defending the UK from Nazi control. His cockpit is riddled with bullet holes, but it just goes to show that even Nazi Germany can’t stop Eddie the Great. For those reasons, and more, this version of Eddie is one of my favorites.

The album Piece of Mind has it’s own iconic artwork to deal with. But in the realm of Eddie, there’s one version of him that is constant everywhere you see. “The Trooper” is arguably Iron Maiden’s most recognizable and popular song. It might not be your favorite, but it’s a hell of a lot of other people’s favorite song. The song tells the story of the Charge of the Light Brigade during the Crimean War. Eddie is on the side of the British (once again), and he’s pictured here in full uniform with a saber and a tattered British flag. Behind him is the war-torn battlefield and of course, the Grim Reaper. This is the version of Eddie that you’re going to see the most in merchandise like toys or figures.

I love this version of Eddie because it’s always present at Iron Maiden shows. Besides two tours where they chose to only play newer songs or A Matter Of Life And Death in full, you’re treated to this one every Iron Maiden concert.

Another look from the Powerslave album, this time it’s the album art. Imagine not knowing what Iron Maiden is in 1984, and grabbing this off the shelf. It’s glorious in every sense of the word. If the World Slavery Tour was what built Iron Maiden into the juggernaut that it is today, it’s because of this album art. Eddie sits regally as the Pharaoh over his empire. If Number Of The Beast was Eddie taking rule of Hell and Satan, this is Eddie taking rule of all of time. As we see with this one and our next entry, Time is just a number to Edward.

This might be the most menacing that Eddie has ever been. His facial expression gives off power and nobility. And of course, the entrance to the pyramid has to be on his crotch. For good measure.

This is the upset of the list. Somewhere In Time was listed as my favorite Iron Maiden album at the end of Iron Maiden-A-Thon, and that hasn’t changed. This album art has the most Easter Eggs of any of the other artwork done in Iron Maiden or Eddie’s career. It evokes the image of the Killers album art with his stance and the hand of whoever Eddie just blasted. The poster by the right side is the first album cover with the words “Eddie Lives” sprawled across it. The rest of the Easter Eggs are up to you to find, but there are definitely some good ones.

I love this art because it combines so many different things about Iron Maiden that is great. There are historical references, there are references to the Iron Maiden on the past, and it’s a reference to the future. You get the total package of this one, and if it wasn’t for the greatness of number one, this would be the best appearance of Eddie.

#1 Appearance Of Eddie: Stranger In A Strange Land Single Artwork

If you’re looking for the most badass and best appearance of Eddie, for a lot it might be Killers or Number of the Beast, but for me, it’s the “Stranger In A Strange Land” single artwork. This is the single best piece of artwork for Eddie out there. It combines all of what makes the Somewhere In Time artwork and others into an even more badass portrayal of Eddie. Chewing on a cigar and wearing a duster like a futuristic cowboy version of Clint Eastwood, Eddie captures the attention of everyone in this bar. The various alient and cybernetic species around him add even more to the picture.

Of course, there’s the trademark clock at “11:58” in the background, which is notably, two minutes to midnight. Throughout the history of Eddie, this remains my favorite piece of artwork with him on it.

This Might Be My Favorite Version Or Appearance Of Eddie, But That Doesn’t Mean It’s Yours

I had to cut out a lot of different versions of Eddie to fit here. There are tons from their music videos, video games, album art, single art, and other artwork that has been done through the years. Eddie is an icon of not just heavy metal, but pop culture in general. He’s crossed over into the vast lexicon of iconic characters through human history. Where Eddie goes, I’ll go.

So, what’s your favorite version of Eddie? Let me know in the comments or on Twitter at @HunterBolding.

For more on Fright-A-Thon, Horror, Heavy metal, Iron Maiden, or any other general pop culture, make sure to check back to That Hashtag Show. 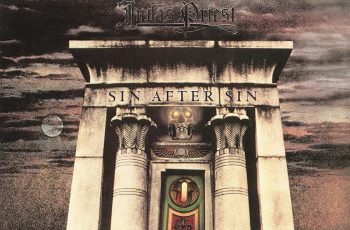 With the release of Halloween next week, Universal decided to …