The cast of The Stand joined New York Comic Con to discuss the upcoming Stephen King adaptation. During the panel, the series debuted an exclusive trailer. Watch it below:

The CBS All Access series adapts the popular Stephen King novel The Stand. The book tells the story of a post-apocalyptic world, after a plague wipes out most of humanity. Then, a battle of biblical proportions ensues between the survivors.

The plague narrative feels especially timely as the world grapples with the ongoing COVID-19 pandemic. But work on the series pre-dates its real-world parallels.

“We didn’t make this show in response to COVID. It’s a testament to how universal the book is, how prescient it is, with how the world has responded,” said creator Benjamin Cavell.

And while the plague event itself kicks off the story, King himself said that’s not really what the story is about. Cavell recounted his own discussion with the author.

“[King said] the plague is the mechanism by which the world becomes a big empty place. But it’s really about the struggle between good and evil that comes afterward,” said Cavell.

This series marks the first time The Stand has been adapted for TV since the 1994 miniseries on ABC.

The Stand premieres December 17 on CBS All Access. New episodes of the 9-episode series will debut weekly.

Watch the full NYCC panel for the series below.

Meanwhile, if you love horror, check back to THS this month for Fright-A-Thon. We’re celebrating everything spooky and scary leading up to Halloween. 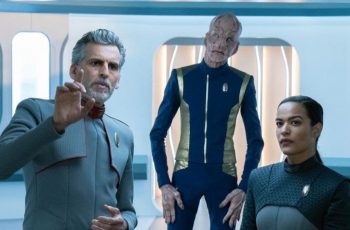