This week from BOOM! Studios we get Seven Secrets 3. This title continues to amaze and intrigue me because it does what you aren’t supposed to do. They say the worst thing for a story to do is to spell events out and be predictable; HOWEVER! They say a story that spells things out and is predictable yet holds the reader enthralled in its characters and happenings shows true genius and greatness. Seven Secrets does exactly that.

In every issue Seven Secrets foreshadows what will come and predictably spell out every move that will be made. The next issue then details everything they said will happen. Having said that this title not only holds my interest, but it keeps me entrenched in caring about the characters and the events to come.

Last issue we met a young Caspar. Time moved forward quite a bit since then and now our hero stands ready to take the trials to become a Holder of the Secret. If he succeeds not only will he be a holder of a Secret, but he will be paired with his mother as well. Most of this issue devotes itself to those trials.

As one of four candidates, Caspar must do one simple thing – hold on to a briefcase as if it were a Secret. The trials start off simply enough. The kids are starved, frozen and deprived of every comfort. It all ends if they simply give up their case. Then things get interesting. One of the final trials comes down to torture, but not just any torture. Strong people can endure self torture, but how much more strength does it take to watch a friend being tortured before you see enough?

The thing I love about this scene is that Caspar pulls a James T Kirk/Kobiashi Maru stunt and changes the rules. When it comes time for Caspar to watch someone be tortured, he rebels, beats the tar out of the torturer and frees the victim. Like Kirk, he gets praise for original thinking since the last person to do that lived 2,342 years ago. This adds a great deal of personality to Caspar and shows he will be an outside the box thinker.

The trial may be the main part of this issue, but at the same time the writers are doing a great job weaving in Caspar’s relationships with his mother and father. Because the job must come first, his parents gave Caspar up to the Order. Even though they trained him last issue they stay very cold and distant. Caspar’s family sits right in front of him and yet they might as well me miles away.

As was told last issue, Caspar’s father is dead. Sigurd did not survive the attack on the Secret, so now in this issue we see how Caspar and his mother deal with the loss. World leaders pay their respects and tell odes to his greatness, but that means nothing to Caspar. He just wanted a father to love him. Caspar’s confession at the funeral questioning if his father loved him was so sad, but the Eva steps up.

The scene that follows with Eva giving Caspar a trunk from his father speaks volumes about the of character of Sigurd and Eva. It takes Caspar a minute to figure out the meaning behind the trunk Eva gives him, but when he does it’s a beautiful scene. From it we also get what will sure to be Caspar’s signature look with his father’s oversized jacket. Then of course we have the final secret Eva gives Caspar – the deepest secret she will ever hold. I really love how writer, Tom Taylor, and company are developing these characters.

Seven Secrets 3 – Are You Paying Attention To the Background?!

Canto, the character in the Masquerade make up, continues to play a very subtle role in the events surrounding Caspar. Without his influence, Caspar never would have been chosen as a candidate for Holder. Canto’s gentle nudges and pushes seem to drive Caspar’s destiny. I cannot help but think he will have a major role to play in the events of the future.

First Keeper also shows she has an interesting personality instead of some dried up, dodgy old person. She also takes an interest in Caspar’s abilities, and despite being 70, she still possesses a great deal of power and presence. I love the scene when Caspar gets beaten and falls off a log during the trials. Caspar asks if he’s disqualified and she answers “Because you fell off a beam? No. You’ve shown us, in the highly unlikely event of you needing to fight for your secret on a plank of wood, you could do with some more practice. If that isn’t straight Yoda/Mr. Miagi I do not know what is.

Seven Secrets 3 – He With No Name

We know of the Secrets. We are learning a great deal about the players who guard said Secrets, but the one thing we know little of is the bad guy who continues to attack the guardians of the Secrets. Amon attacks back in issue 1, and we know he killed Sigurd. Beyond that he barley features in the story so far. At the same time we are being shown in very subtle detail exactly how bad ass he truly is.

He kills Sigurd, but not only doe she kills him, he decapitates him, hangs the body on Buckingham’s gate with a note, and drops the head in a bag. Amon, as his helper calls him, doesn’t care at all if cameras see him. Instead he WANTS to be seen. The note he leaves simply states – ‘we know’. This guy shows his ruthlessness, his fearlessness and his relentlessness to pursuing the Secrets. It also shows us this title will not pull punches either.

Then we learn one final clue. As Amon leaves the bagged head behind he says goodbye to Sigurd and that “You were good to me once.” WHAT!? Did Amon used to work with the Order? There is definitely a past between Sigurd and Amon, but in what manner and how did it go sour? I can’t wait to learn more about Amon going forward and it looks like Seven Secrets 4 may shed some more light on his story.

If you have yet to check out this title you really need to! Stay tuned to Thathashtagshow.com for more on Seven Secrets.

The Solar Ranger was introduced to the fans at the … 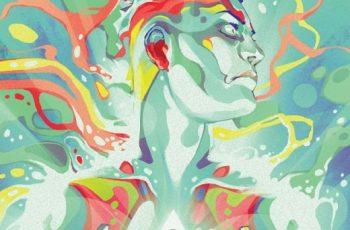 Julian Demond is on a mission to find God, but …