Well it came from a Cronenberg. That should really be all you need to know about Possessor. Which has the “uncut” tag on the end of it because it is not a film that would get an R rating from the MPAA. There is no censored version of the film, so it’s a nice marketing ploy, but it’s not needed. What is needed, is for sci-fi/horror fans to get their eyes on this film. Once you’re locked in with your gaze, you won’t let go. The images on-screen might disturb you. They might frighten you. But you won’t be able to take your eyes off the screen.

To start off, the world of Possessor is very much stylized and like our own. There are contract killers in the world, except instead of using their own bodies and minds to kill, they take others. How do they do this? With a machine that “possesses” another person. If you enjoyed the mind-bending, question your own reality, ways of Inception, Possessor is the big-brother of that movie. It’s not as grandiose and high-thinking, but it certainly makes up for it in other ways.

The Official Synopsis Of Possessor

From the visionary mind of writer/director Brandon Cronenberg, POSSESSOR is an arresting sci-fi thriller about elite, corporate assassin Tasya Vos. Using brain-implant technology, Vos takes control of other people’s bodies to execute high profile targets. As she sinks deeper into her latest assignment Vos becomes trapped inside a mind that threatens to obliterate her.

The Great And That’s It Of Possessor

To go over the faults of the film, would be to nitpick. This is truly one of the best sci-fi/horror experiences of the 2000’s. In a world where horror and science fiction are somewhat marginalized by sequels, remakes, re-do’s, and more, this is a breath of fresh air. Without going into complete spoiler territory, you won’t be sitting easy watching this film. Throughout, you’re wondering what’s going to happen next, and the acts of brutal violence that are peppered through are stunning.

Everything about this film feels like a throwback. Or if you were to take Cronenberg’s dad, and bring some of his classic films to the modern age. The effects are all done practically. So all that violence on screen is 100% real looking. It provides the film with that vintage look that everyone yearns for, but not a lot of filmmakers actually attempt. So if you’re one of those people out there that sneer “they don’t make movies like they used to in the 80’s”, jokes on you, because this one does.

Like many other body-switch films, this one could have fallen into the trappings of that sub-genre. It doesn’t. Whenever you think that it might be veering into a territory that is cliche or done-to-death, you’re taken back by the originality of the film. By the end of the ride, I wasn’t sure who was who, or what was real in the film. That effect of disorientation lends itself to multiple repeat viewings.

This One Needs To Be Analyzed For Years To Come

I for one, cannot wait for this film to come out on Blu-Ray. You’re going to need to watch it multiple times. Check each corner, see all the details, because it’s that kind of movie. Like the main character, Tasya (played by Andrea Riseborough), you might lose your sense of self while watching it. Speaking of Risebourough, the cast is fantastic.

Christopher Abbot, Riseborough, Rossif Sutherland, and a small cameo appearance by Gabrielle Graham at the beginning, all steal the show. You know that Jennifer Jason Leigh and Sean Bean are going to be great in everything they do, but the “newcomers” in Possessor are the ones that come out shining brighter than anyone.

Obviously, because I’ve been waxing on about how great this film is, the direction and writing by Brandon Cronenberg is top notch. He surely learned something from his dad, because this is a great representation of that 80’s style that we all love so much. It doesn’t lean into that too hard though, but it feels very familiar.

If Brandon Cronenberg’s career gives us more like Possessor, then we’re all in luck. This film needs to be seen to be believed. I wholeheartedly recommend it to all fans of the genre. You’ll be shocked, enthralled, and most importantly, you’ll be left thinking. That’s the whole crux of Possessor. You’re trained to think one way, and you might leave this film thinking another. For a movie to do that these days, is an achievement in and of itself. It’s a violent and disturbing ride that you won’t forget for years to come.

Make sure you watch this film.

So, for more on Brandon Cronenberg, sci-fi, horror, or any other general pop culture, make sure to check back to That Hashtag Show. 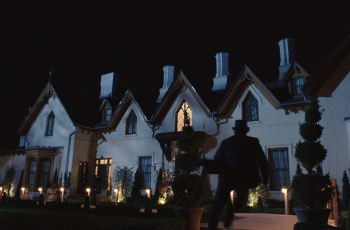 If you went through the entire Halloween season and didn’t …