For the first time this season Discovery finally shifts gears from a character driven episode to more of an action-based episode. While the character-based episodes have been great, it feels good to get out stretch the legs and flex the phaser finger for awhile. The story line for this episode comes across straight enough. Book finds a black box, but gets captured. Burnham must find and rescue Book in order to get the box….and Book, but in the process a few seeds take root. What those roots grow into remains to be seen.

At the very beginning of Episode 3 Saru and Burnham instantly and unanimously choose Saru to captain the Discovery. As events play out, Burnham becomes Number One, the second in command. This seems like a great choice, but it never quite sits well. Burnham suffered from discipline issues when the show started, and now, after a year wandering the galaxy without Discovery, her roguish instincts stick out now more than ever. Following orders can really chafe when one gets used to their freedom.

Sure enough in this Episode, Burnham sees opportunity where Starfleet sees a waste of time. If the galaxy weren’t falling apart maybe things could be different, but a shattered Starfleet limits their vision. Burnham does what Burnham does best and goes rogue. Naturally, the greatest influence becomes her greatest ally in accomplishing her rogue mission – Phillipa Georgiou. Burnham may have integrated faster into Starfleet without Georgiou, but with the Mirror Universe Empress on board, Burnham’s independence is only flamed higher.

I love any scene that uses Georgiou. I can’t get enough of her smart mouth and how she commands every situation she walks into, usually at the expense of someone’s dignity. The problem is as long as she remains on Discovery, she will impede Burnham’s ability to re-integrate into the Federation. She will always encourage Michael to act out on her impulses and ignore the chain of command.

Add in Burnham’s impulses to do what she thinks is right, and you have a crew that cannot function. She loses her Number One status. So what is she? A simple Science Officer? I do not see that being a good role for her as it limits her abilities and sets the bridge crew on edge. They want to see her as more. She nearly became captain of the ship, but now her words and actions are to be ignored? Whoever replaces her as Number One will never feel at home sandwiched between Burnham’s presence and Saru’s leadership.

The simple answer for showrunners seems to be let her escape with Book and they run their own missions on Book’s ship. The problem with that is this show is called Discovery, not Star Trek – Book & Burnham. While this could happen for a time, the origins of Discovery seem to focus on Burnham. She has become the one character the show cannot lose. Does this mean Saru’s future/life could be in jeopardy? If Burnham stays on Discovery, I do not see her being any less than Captain eventually.

Georgiou has issues. We know this, but this time they run deeper than before. We see more of her visions in this episode, and while we see a bit more content, their exact nature remains a mystery. What is she seeing? Are these events of her past that became unlocked after the interrogation? Or does she future events?

Georgiou comes from the infamous Mirror Universe, which according the 3188 present day scientists, has been either destroyed or ‘moved further away’. It might be possible this created a sickness in Georgiou, but not likely. Since this began after the interrogation where the inquisitor unlocked her caring for someone (Burnham), these visions must be tied to her heart. It seems as though someone dies and Phillipa is powerless to help them. I think Georgiou either watched a former daughter/loved one from the Mirror universe die, or she sees the future and the dying person is none other than Burnham. Either way, Georgiou will need to override her own instincts and trust someone in order to deal with these visions.

The other illness revolves around Lt Detmer. Even Starfleet recognized she suffers from traumas past and present. When the rest of the crew transforms into giddy school children when they experience Discovery’s upgrades firsthand, Detmer steps back, shaken by the new equipment. Detmer keeps receiving small roles in these episodes so far, but I can’t help but think a major episode with her as the focus is coming. Her ghosts need to be dealt with.

For the past couple episodes, we slowly get to know Adira. While a lot changes over a thousand years, the ease in which she upgrades Stamets’ spore pod shows her extreme intelligence. Switching to gel-packs and removing Stamets’ arm interface make his life so much more comfortable now. She clearly keeps pace or exceeds Tilly, Stamets and Reno, but what about Gray?

Gray seems to be some sort of phantom. His presence defies Trill precedent and leaves both Adira and Stamets confused. Gray should not be there, but he is. The ending of this episode now makes me ask – Does Gray exist? We see no reason for him not too, but at the same time when Adira tells Stamets what she sees, she describes it in a manner that almost sounds like he may not be real.

Between the way Adira describes Gray and the way they shot the scene, it makes me think he might merely be a made up creation of Adira’s mind. She has suffered so much trauma that perhaps Gray’s existence merely echoes her unconscious mind. Gray merely voices her own will that she fears to face, but that seems like an easy out for a sci-fi show like Star Trek.

Season three of Discovery wants to tell the story of reforming the Federation, but the more interesting story lines seem to come from within Discovery. Many parts of the crew seem to pull in different directions. Like Tilly, Reno and Stamets said last episode, Dysfunction is the team and how those three work so well together, but that does not stand true for Discovery.

Burnham swears the Federation cannot fully return until they unlock the mystery of ‘the burn’. Likewise, Discovery cannot go forward until the crew solves some of their own questions. Where do you think these problems will take the crew of the Discovery before the end of the season?

PS – Who wants more scenes of Tilly and Grudge!? That scene killed me!

CBS has created a global franchise group to manage the … 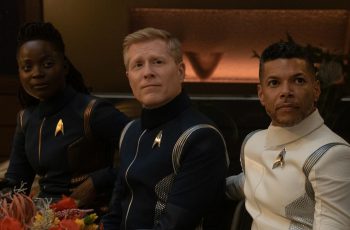 Having just finished the fourth episode of Discovery‘s third season, …