Air Jordans are some pretty big shoes to fill. So, when Warner Bros. announced it was going to make a sequel to its 1996 smash hit Space Jam, expectations were high. The studio got off to a good start casting a lead that many feel is the best basketball player since Michael Jordan in LeBron James. Slated for a July, 2021 release, Space Jam 2 will again reunite our childhood Looney Toons friends with the NBA. Although there are few other details to date,That Hashtag Show obtained these exclusive character breakdowns and plot details for Space Jam 2.

We already know that LeBron James is attached as the male lead for Space Jam 2. That Hashtag Show has learned that his character will be joined by his wife, three children, and business manager.

Male or female, athletic and bright, Dom is LeBron’s 2nd child. Dom is a young basketball star in the making but is more interest in just being a kid and playing ball for fun. He has a special knack for video games and is desperate to connect with Dad on other things besides basketball, but struggling to find any common ground. Dom has a defiant streak that he/she mostly suppresses. Still it’s there in the subtext of all their interactions with their father. Will the help of the Looney Tunes, Dom and LeBron learn to foster a deeper personal relationship outside if and through their mutual love of the game. MUST HAVE EXCEPTIONAL BASKETBALL SKILLS.

Kamiyah is LeBron’s wife and mom to Darius (17), Dom (14) and Xosha (7). Kamiyah is the rock of the family and loves her kids unconditionally. She is often the voice of reason when it comes to LeBron’s relationship with Dom.

Malik is LeBron’s business manager, best friend and right-hand man. They grew up together in the same neighborhood and have been best friends since they were kids. Malik can often be found pacing the sidelines of LeBron’s games with his phone glued to his ear, hustling the next great step in LeBron’s career.

Darius is LeBron’s oldest son and a star basketball player. Although he and Dom have their differences, he is protective over his little brother. Dom is very close with his dad and has dreams of one day playing in the league alongside LeBron as his teammate.

Xosha is LeBron’s youngest child and the apple of his eye. She loves sitting courtside and keeping track of her dad’s game stats. She is mischievous and often plays practical jokes on her dad. She’s strangely five steps ahead of him.

Granted, Warner Bros. has not yet cast any of these supporting roles for Space Jam 2. (Although, IMDb claims that young actor Derrick Gilbert has been cast as “Kid”.) Terence Nance will direct, with Alfredo Botello, Andrew Dodge, and others providing the screenplay.

Stayed tuned here to That Hashtag Show from more information on Space Jam 2 as we get it! 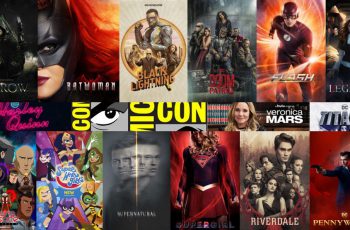 With Warner Bros and Disney dropping out of this years …