This morning, Legendary Pictures, The Pokemon Company, and Warner Brothers released the first full trailer for the Detective Pikachu movie. Along with that, the first poster released as well:

This film is going to be a live action adaption of the Detective Pikachu video game that released earlier this year from Nintendo and The Pokemon Company. Ryan Reynolds is going to be voicing Pikachu in the film. Meanwhile, Justice Smith, who is from Jurassic World: Fallen Kingdom, and the film adaptation of the popular young adult novel Paper Towns, will be playing Tim.

The film will be including lots of cameos from other Pokemon including Mr. Mime, Charizard, Squirtle, Psyduck, and many other beloved Pokemon characters we’ve come to love. The film will be taking place in Ryme City, which celebrates the harmony between humans and Pokemon.

Now we get to see Tim and Pikachu meet for the first time when Reynolds’ Pikachu sneaks into Tim’s house, and says, “Look I know you can’t understand me. But put down the stapler or I will electrocute you.”

This film looks like it will a pretty good adaption of the video game, and I’m really excited to see what other Pokemon will be in it. And you can check out the trailer below. The film will be releasing May 10th, 2019. 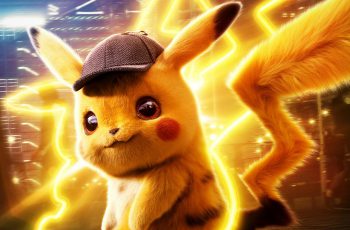