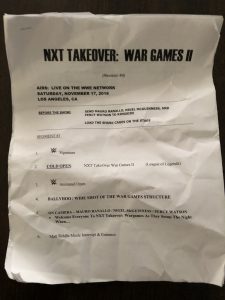 This post on reddit from user “chris_castaneda”  tells the story of how he got the script originally, and it was all thanks to Tommaso Ciampa (who threw the script at Mauro Ranallo towards the end of his match with Velveteen Dream).  It’s pretty neat, but let’s talk about the most interesting part of this leak: 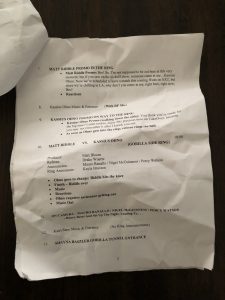 This match was originally scheduled to to EIGHTEEN MINUTES.   Funny enough, the only thing we got to see was the finish as it is stated in the above image.  Looking at the times via the Wikipedia page for the event shows that none of these times actually stuck, and it looks like more time was given to the main event.

Am I saying I would have liked to see Riddle/Ohno go eighteen minutes?  Absolutely.  If we didn’t have this leaked script, I would have been fine with my stance that the seven seconds shocker was a nice little last minute edition to this event.  But with this script leak, clearly this was a last minute decision.

Clearly, they wanted to save this match and build it up a little bit more.  We will probably have to wait until the next TakeOver but as someone who has seen Riddle/Ohno before, trust me when I say: It will be worth the wait.