In 2017, we saw the Power Rangers return to the big screen with a feature film that most in the community had positive reactions for. It was the mass audience that it didn’t hit home with. Power Rangers grossed $85 million domestically and $56 million in the foreign market, making a grand total of roughly $141 million worldwide. The budget for the film was $100 million so the studio, Lionsgate, didn’t consider it a success by any means. Lionsgate was hopeful that Power Rangers could replace ‘The Hunger Games’ franchise for the YA audience.

Many things lead to the film underperforming. It didn’t help that it was going up against Disney’s live-action Beauty and the Beast in its second week. Power Rangers should have opened against Boss Baby the week after. It would have faired a lot better. Power / Rangers creator Adi Shankar thinks audience didn’t connect with the film for another reason. While talking to Screen Rant, Shankar explained why the film didn’t work:

Adi Shankar: So you know I think, again origin…mistake. Right? It’s a mistake. It was cut, copy, pasted, pieces of other things that we had seen before. Right? And then the iconography that we’ve all come to know and love even though it is viewed through…even though I know that there’s people that think it’s corny and stuff. It’s still iconography. Don’t change the fucking iconography. I don’t know if I can swear, but don’t change the iconography.
Screen Rant: You can.
Adi Shankar: And again it didn’t need to be Pacific Rim. It didn’t need to be like giant Zord battles. It’s almost like a bunch of executives got in a room and got together and said, “Oh teenagers with attitudes. Got it. We’re going to make an emo teenagers, with real teenager problems.” But the reality is like, one. those aren’t real teenager problems…of today and two, that line was always a misnomer. They weren’t teenagers with attitudes. They were teenagers that did really good in school, were wonderful members of their community, and did karate in their free time…the only guy that had attitude was Tommy and that was because he had a candle that was burning out his powers and he was justified. So the little tinge of attitude comes from Tommy and that’s not really attitude. You throw Tommy in the MCU and he’s like a boy scout.

You can check out the rest of the interview over at Screen Rant but Shankar has given his take on the franchise with Power/ Rangers.
Do you agree with Adi Shankar? Leave a message in the comments below.

Get excited ranger fans as we have another surprise for … 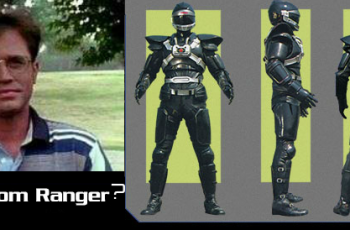