This is one of those issues that, while very needed, is a type of story telling I am not a huge fan of. This issue parallels those movies and television episodes where it opens amidst explosions, fighting, action and then steps back saying something to the effect of “Its been a rough 48 hours.” The show then jumps back in time 48 hours to show what has led to the disaster we just watched.

Last issue the Titans, now with Kyle Rayner joining them, charged into Unearth ready to do battle.  Instead of getting said battle, the comic clock jumps backwards in time to show the rise of Sonya Tarinka as Mother Blood.  It is important, but when you expect a battle and get exposition, it can be disappointing at times.

Having said that, let me now back up to the covers.  Cover A misleads readers slightly.  Realistically this does not happen in this issue, but metaphorically it does perfectly reperesent Mother Blood and the Titans.  Mother Blood’s manipulations have the Titans right where she wants them.  Cover B, however, is simply a beautiful representation of the team in motion, charging into battle.

The story may have been done a thousand times in other titles, but this is a good telling of a young nobody rising to power and overthrowing the “face” of power.  Sonya is a nobody with no hopes in a future.  She falls for the teachings of a maniacal, fake cult leader who promises power and position when in fact it’s all about his vanity.  Brother Blood wears the costume of a demon with power, but Sonya BECOMES the very essence of that power.  What he pretended to manipulate, she wields with great effect.  The one-page shot of Sonya’s blending with the power is quite incredible and very well drawn and colored.

Sonya demonizes her friends with her new blood magic and begins her course to reshape and take over the world.  She knows she cannot do it alone, or more to the point – why do something yourself when your enemy can do it for you faster and easier?  Mother Blood plays the Titans and gets them to open the doorway to Unearth, right where she wants to go.  The Titans feel they are doing the right thing, not only to take down the Bloods, but to help Raven get her soul-self back.  Instead they are merely puppets, paving the path for Mother Blood. 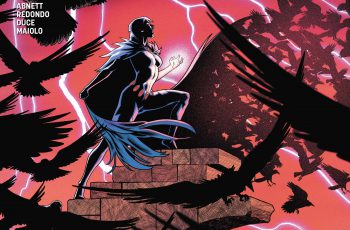 In Titans #35 our story is nearing its ending. The …