Once again, the team is in a world of hurt. Things continue to go wrong and what’s worse is that they keep getting worse! But we will get to all that in a minute. As usual let’s start with the awesome covers.

Cover “A” is mega-Beast Boy ripping the crap out of the rest of the team. Everyone but Miss M is thoroughly beaten. Beast Boy looks like he could trash Thanos. The red veins are a great and subtle add to the picture that help hint at the story ahead. The only down side to this cover is that it feels an issue too early. It would be better fitting to the cover to issue #35.

Cover “B”, meanwhile, is a fantastic team shot with everyone in different poses. Steel is determined, Donna stands ready to lead, Beast Boy is ready to rip anything limb from limb, and Raven and Miss M are both flying into action. Oddly they are the only two with smiles on their faces. Then in the background, Kyle stands, head down and fist clenched. Where Steel looks stoically determined, Kyle looks sad yet ready to avenge.

One Queen Rules Them All

Okay, back to the endless problems of the Titans. Kyle and Natasha are prisoners of the Blood Queen. She needed them for their particular skills to map the multiverse and all its gateways and portals. Meanwhile, the rest of the team is fighting for their lives, and losing. What could go wrong for team Bad Guy?

Things start to go wrong when Maker Earnest walks in on the interrogation/torture of Kyle and Natasha. He finally discovers the truth of what is happening. Earnest wrote and created this universe and everyone in it, yet he failed to take into account that when you write a bad guy as a treacherous bad guy – guess what?! He’s gonna be treacherous and betray you! Lord Travesty did what he was written to be.

Again we jump back to the heroes in the field. They pushed back part of the army, but they were still overwhelmed and running for their lives. What the teams needed was a miracle, or a sacrifice. Wounded and seeing no other option, Miss M turns on the hoard and unleashes everything she has.

We get a great artistic depiction of a giant explosion with her at its center, Demons flying in every direction. In the next panel we see the aftermath. Essentially, a nuclear blast went off – bodies and scarring and damage radiating out everywhere from Miss M. The team attempts to reach her before she collapses completely, but they are cut off by the entrance of Commander Lenore, Raven’s double.

The Winds of Change

This issue really keeps things hopping back and forth between the battlefield and the tower. Back at the Keep, Kyle and Natasha find themselves inside the mapping process. Natasha is overwhelmed with the overload of information. Kyle makes a suggestion that helps Steel not only cope but see the way. Maybe they can find some answers from within the process.

Earnest has seen enough and steps into the fray. Program, meet User. It is amazing what one can do when one is master of said universe. Earnest dispatches the guards with his own “magic” and gets ready to fight back, at least until Lord Travesty stabs him in the back.

While displeased at first, Queen Blood sees this as clearing of the road and an opportunity to unleash the next step in her plan.

We jump back to the battle where we get a brilliantly laid out panel. In the faded background we see Queen Blood’s face, smiling like a Cheshire cat. In the foreground we see what the “A” cover foreshadowed. Beast Boy is howling in rage and pain as his blood vessels expand with red blood of the Queen. What lies ahead in the next issue cannot be good for our little green buddy.

Titans will be the first live-action series to debut on … 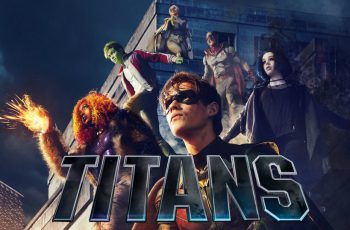 The second season of DC Universe’s Titans, the show that …