In a press release, VRstudios said that “Star Trek: Dark Remnant puts you in control of the U.S.S. Galileo, Starfleet’s latest and most advanced stellar research vessel, accompanying the U.S.S. Enterprise on a routine mission to evacuate a stellar observatory located in the middle of the Klingon Neutral Zone and learn more about the decaying neutron star it orbits. When the neutron star collapses prematurely it leaves the Enterprise incapacitated. It’s now up to YOU to protect her from stellar debris – and the unwelcome arrival of a Klingon ship out for vengeance.”

teamed up with Strange Reptile to make the game as replayable as possible. In addition to having several different endings, it will also randomize the characters and dialogue, so the game will be different just about every time you play it.

Chantel Summers, the Vice President of Creative Development at stated that in the game, “Players get a perspective of the Star Trek universe in a different way than they have experienced before –coming face-to-face with the Enterprise in all its beauty and splendor. Working together with Strange Reptile on this title has enabled us both to use our complementary strengths to delight players with this unique Star Trek adventure. We have combined all the well-established frameworks of Star Trek with some all-new story elements and characters, while also delivering multiple different endings to keep players coming back for more!”

Th game is now playable at Dave & Buster’s, and we will be having a review for it out later this week. 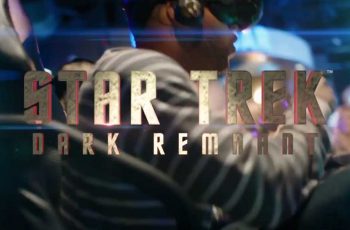