After the end of Episode two, there were essentially two things people were talking about. The lesser, but no less important scene was the gathering around the fire. Podrick, Sir Davos, Tyrion, Tormund, Brienne, and Jamie sat around the fire for fire’s sake. The group bonds which means most of them will be dead soon.

The other scene, the more talked about happening, was not only Arya having sex, but the partial nudity used in the shooting of the scene. Some were appalled to see it. Some, like myself, sat there slack jawed that the show did this. Arya was none too subtle about her feelings for Gendry these past two episodes, so the act should not shock people. At the same time it, in many ways, felt like watching a movie with your parents when a nude sex scene pops up….very uncomfortable!

Should we really be shocked that we saw this? Absolutely not. Nudity has been a part of the show since the very beginning, and they have even invented the term “Sexpostion”. When a story has to stop and explain something for the audience, it can slow a story down a bit. Throw in some nudity and sex and audiences don’t care quite so much.

Also, let’s look back at the history of the show. With Maisie/Arya now having a partially nude sex scene, every major female character in the show has had a nude scene. Some, like Lena Headey, used body doubles, which is totally fine. The only two women to not have nude scenes are Michelle Fairley/Catelyn Stark and Sophie Turner/Sansa Stark.

Those who have read the books will remember that Sansa actually did have a nude scene when Joffrey had her stripped in public during season/book 2. Problem there was Sophie was only 16. Even had she been old enough, Sansa would still have been young and I can’t help but think there would have been a backlash for filming such a scene.

So Why The Controversy?

With all this nudity why is the Maisie/Arya scene causing such a stir? The first is Maisie’s age. Many don’t see her as being old enough to shoot that scene, but Maisie just turned 22 in April. Maisie is not the issue.

The real issue is Arya. Arya is our baby girl. In book 1 Arya was roughly 11 years old. We have followed her on her journey for the past 7 years, watching her grow and learn. When she hurt, we hurt. The real reason for the shock and outrage is Arya will always be our baby girl, but she is grown and an expert assassin.

Bran and Rickon are the youngest of the family, but we didn’t follow them as closely as we did Arya. While their path was difficult, it didn’t match Arya’s journey. To most, it is simply the realization our little girl ain’t so little no more. 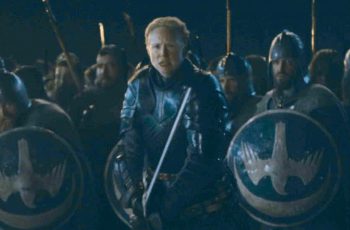 Avengers: Endgame and this episode overloaded just about every emotion …
THE BATMAN Kit Harington is best known for playing frowny …