We all know the name Ron Howard. Most people these days are familiar with Howard as an award-winning director. He even got a chance to direct Star Wars with his work on Solo: A Star Wars Story. His daughter, Bryce Dallas Howard, has certainly followed in her father’s footsteps. Best known as an actress (the Jurassic World series; The Help) she is becoming a talented director in her own right. Recently she had some interesting things to say about her work on the upcoming, live-action Star Wars series, The Mandalorian.

Back in October we told you that Bryce Dallas Howard would be among the directors for The Mandalorian. The show will be the first-ever, live-action Star Wars series, premiering on Disney+ November 12. The Mandalorian stars Pedro Pascal in the lead role. Howard, in speaking with Collider about her upcoming film Rocketman, opened up about her experience on a Star Wars set.

It was so, so awesome…I had incredible support from Dave Filoni and Jon Favreau. [I]t was so incredibly collaborative, and fun and grounded.”

Dave Filoni, of course, is probably the best, creative mind in Star Wars right now. Likewise, Jon Favreau is perhaps one of the most successful producers in Hollywood. To hear that Bryce Dallas Howard worked so closely with those two says a lot about her as a director, and about how invested all of these folks are in The Mandalorian. Howard would go on to discuss the technological aspects of filming, making an egregious Star Wars faux pas later in the interview.

There was specifically something that we shot in that we called “The Volume”. Basically you step into it and… the naked eye, you can’t tell that you’re surrounded by basically LED screens….this is the wrong term to use, especially for this project, but it’s almost like a holodeck.”

Yes, Bryce Dallas Howard used a Star Trek reference when talking about Star Wars. But, given the insane coolness of the holodeck concept, and the fact that reality is now apparently imitating fiction with its use… We’ll let it slide.

The Mandalorian debuts November 12 on Disney+.

Disney has been showcasing new characters in advance of Star … 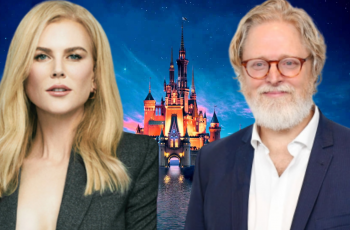 Disney recently just revealed a new poster and title for …