Comic fans will have no shortage of new titles to read this fall. Fallen Order: Dark Temple and Cassian and K-2SO are already slated for a Fall release ahead of the new Fallen Order video game and of course, Episode IX in December. Now we learn of four new one-shot titles from Marvel called Age of Resistance. On the surface, more content is always welcome. However, the release of these particular titles is a symptom of a larger problem with the current Star Wars Universe…

Age of Resistance: The Good

Let’s start with what we know about the new titles. Star Wars: Age of Resistance will cover the backstory of a few characters in the new film trilogy. The first will kick off in July with Finn.

Regardless of how many fans feel about the current trilogy, you know they will still buy a ticket. Even the most disappointed fans are still invested enough in Star Wars to go see the final installment of the Skywalker saga.

The real loser of this announcement are the casual Star Wars fan who will see the film, but never pick up the comics. And that’s ok, perhaps they don’t care that much.

These Age of Resistance titles are the unfortunate result of poor character development from the current big screen films. The excitement among fans when the current trilogy with the comic announcement back in 2012 could be felt worldwide, but the delivery has been a mixed bag.

I can make an argument against the other trilogies for the same problem. The first example that comes to mind is the introduction of General Grevious as the mega arch-villain of the Republic alongside Count Dooku. However, Lucasilm thrust Grevious on us just like Snoke. No history. No backstory. Just a big baddie that showed up one day as the bane of the galaxy’s existe﻿nce.

Attention all scruffy looking nerf-herders! Disneyland has big news for … 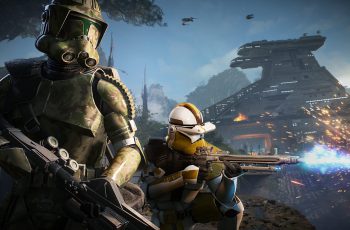 Fans of Battlefront II will be excited to learn that …